The wait has been shorter this time around. Barely two months after his last win, on the Tour of the Alps, Thibaut Pinot made it again this Saturday on stage 7 of the Tour de Suisse, which ended at the top of Malbun, in Liechtenstein. After joining the morning breakaway with Lewis Askey, the French climber perfectly managed his effort in the final climb to conquer a solo victory on the line. Behind him, Sébastien Reichenbach took a fine ninth place, which allowed him to move up to sixth place overall, while Stefan Küng limited his losses very well and remains seventh on the eve of the final time trial, where he will be a clear favourite.

The second mountain stage was on the menu this Saturday on the Tour of Suisse, which was, on a side note, heading towards Liechtenstein. On the way to Malbun, through the Lukmanierpass in the first part of the race, another summit finish was awaiting the riders after almost 195 kilometres of racing. For Groupama-FDJ and Thibaut Pinot, the plan was crystal clear: to get up front. “I had a difficult start to the week, but I gained confidence on Friday when I saw that I was once again able to follow the leaders,” said Thibaut Pinot. “I told myself that there was a good chance that I could play for victory if I was in the breakaway today. That was the goal since last night.” It however took about thirty kilometres for the race to settle. Lewis Askey followed a first move, which Thibaut Pinot was able to join in the foothills of the long climb of the Lukmanierpass (29 km at 5%). “It wasn’t easy to go in the break”, he said. “A lot of teams didn’t want me to take it, so we had to insist, and the team did a great job to help me get in front. Antoine really controlled the bunch to allow me to jump into the breakaway. It was also a team effort.” “We had to push hard, and he really had to fight for it”, confirmed Yvon Madiot. “We didn’t want him to be alone either. The idea was to put a rider with him, and it turned out to be Lewis. He worked a lot for Thibaut in the first part of the race”.

“I came here to live this kind of stage“, Thibaut Pinot

It was indeed after a big pull from the Briton, five kilometres from the top of the first climb, that Thibaut Pinot launched an attack. He was followed by Clément Berthet, and both took up to thirty seconds before part of the breakaway managed to bridge across. After the Lukmanierpass’ downhill, a group of fourteen men was therefore leading the race. The gap, close to eight minutes at one point, reduced to five minutes in the long valley leading to the final climb. “We quickly understood that the peloton’s strategy was to let between three and four minutes,” added Yvon. And the advantage was therefore of… 3’30, when tackling the last ascent towards Malbun (12.6 km at 8.6%), in Liechtenstein. The gap was potentially enough to play for victory, and the fight therefore started straight away among the leading riders, as Ion Izagirre went from the bottom. After waiting for a few moments, Thibaut Pinot then caught the first riders in pursuit and then found himself in a first chasing group with Alexey Lutsenko. The two men stayed about thirty seconds behind the Spaniard for a long time, before the rider from Melisey picked up the pace with five kilometres to go. After getting rid of the Kazakh, he bridged to the Spaniard two kilometres from the top before and almost immediately dropped him. The Frenchman then flew to a master victory.

“It was very hot, so it was important not to put myself in the red zone from the bottom”, he said. “It was risky, but my tactic was the right one. There was no panic, but there was surely a bit of doubt when I heard I was forty seconds behind. The speed at the bottom was too high for me, and I kind of knew that Izagirre would pay for it on the final, which we also knew was very steep. In these temperatures, if you go over your limits, you necessarily pay for it. I was in control, even you’re never sure if it will be enough. I climbed the way I wanted, and it worked”. “Pacing himself, he picked up the riders one after the other”, added Yvon. “He did it with experience, courage and also thanks to a good shape”. With a gap superior to thirty seconds under the flamme rouge, Thibaut Pinot was able to fully celebrate his second win of the season. The taste was different, but also very special. “I ride my bike to win races”, he argued after the finish. “I came to the Tour de Suisse for that, to live this kind of stage. This victory means a lot. The Tour de Suisse remains one of the most beautiful races of the season for me. Winning here confirms all the work done since the start of the season. It is also very good ahead of the Tour de France, and it will allow me to get there with a certain peace of mind. Winning under 35 degrees is also important for me. I went to the car a lot, I took a lot of bottles. I tried to stay as cool as possible, that was the most important thing for me”. “It is yet another level than when he won in Italy”, slipped Yvon. “He continues to pass milestones, slowly but surely”.

After bringing the team its eighth victory of the season, Thibaut Pinot also saw Sébastien Reichenbach and Stefan Küng also achieved very good performances on the last climb. The first one took ninth, 50 seconds behind the new leader Sergio Higuita, while Stefan Küng limited his losses to 1’40 to the Colombian. “It’s a great win, and the day overall is not bad either since we still have two riders in the top-10 overall”, said Yvon. “Seb and Stefan put on a great ride, and we had great confirmation of Stefan’s fine shape. He lost some time because it was a very difficult climb, but he is still there, he is hanging on”. On Saturday evening, Sébastien Reichenbach is in sixth place overall, 2’09 from the yellow jersey, closely followed by his fellow countryman, seventh ten seconds further. “The goal of my preparation was not to go for GC of this Tour de Suisse, but I have passed a real milestone in the mountains this season, and I will no longer set myself limits”, explained the double European time trial champion. “We’ll see how it goes in the future. I have prepared to perform well on the time trial, especially for the Tour, so I am scared for tomorrow”. On Sunday, a 25,6-kilometer race against the clock will set the final positions in the Tour de Suisse. “He will do a very good time trial, but his legs might feel heavy after two days fighting in the mountains”, concluded Yvon. “He will have extra motivation because he will be fighting for a very good GC. He will start with two goals tomorrow”. 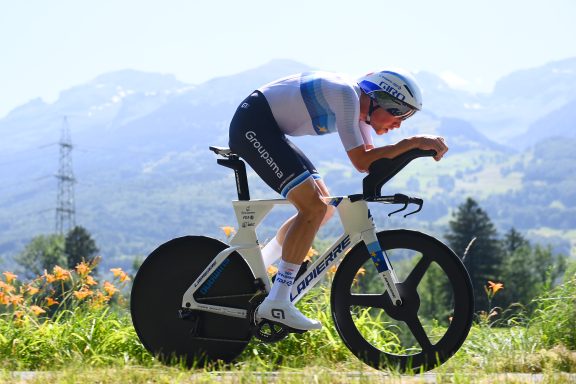 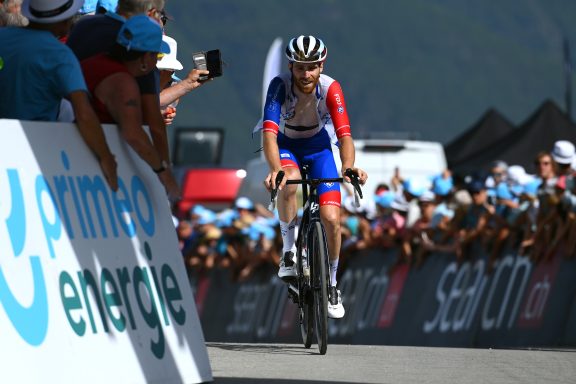 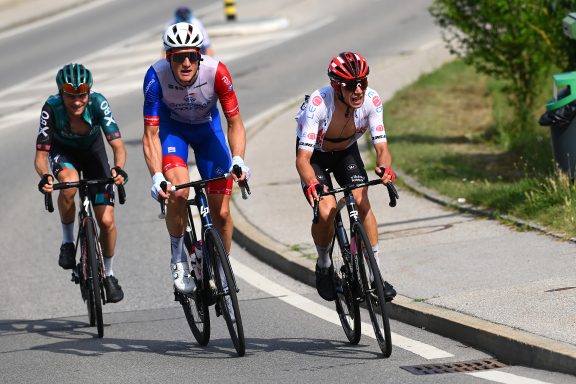