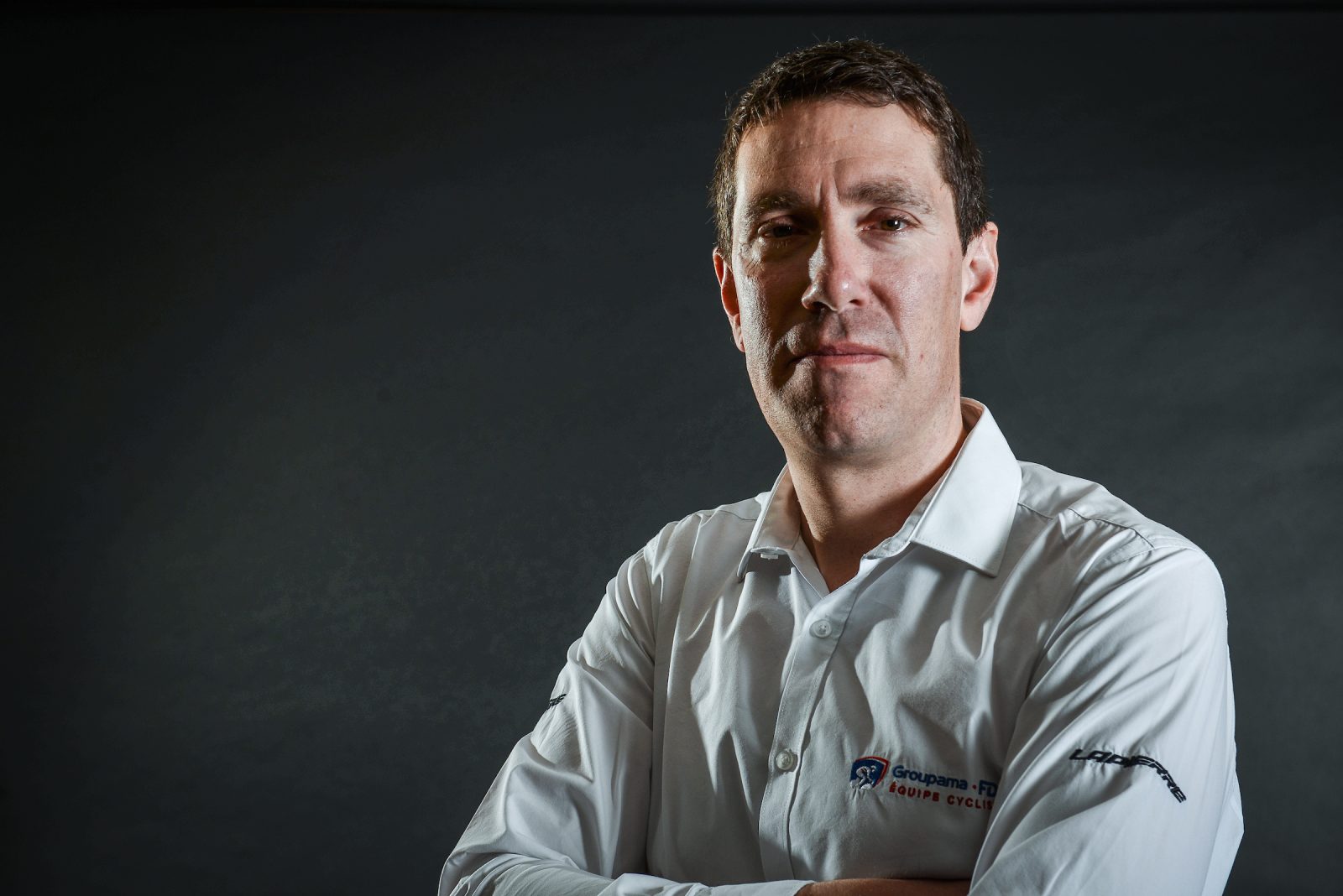 With the cycling season on hold for the next few weeks, two Groupama-FDJ teams, and not only one, have temporarily suspended their sports activity. The development team, which had just launched its second season, suffered the same fate than the WorldTeam. The young talents are therefore in standby and their plans for 2020, a year anticipated as very important for some, have been turned upside down. While trying keep an optimistic outlook, the team’s Swiss manager Jens Blatter sat down to discuss the present and near future of the “Conti” in this sensitive period of time.

Jens, can you first give us an update on your riders’ situation?

They were all in Besançon until last Monday, but we quickly understood that things were not going the right way. The weekend prior, I therefore prepared all the trips so they could go home. The Executive Committee quickly gave its approval and from Monday, we were able to start sending them home. Knowing that all the races are cancelled, the most important for us is that they can be with their parents, their family. We gave them the chance to go home and everyone took this opportunity. It made no sense to leave them locked up in their apartment in Besançon. We were also afraid that some countries would close their borders permanently, and that it would no longer be possible for them to return home.

“Our riders can feel secure”

Have there been any problems in this matter?

There is one exception, Yakob Debesay. He is still in Besançon because it was too late to send him home, and we also thought that he was safer in Besançon, France, than in Eritrea. Right now, we do not have the figures for Africa but the virus is not going to stop at the continent’s gates. The most complicated logistics was the one for Žiga Jerman, as it was no longer possible to fly from France to Slovenia. We could only send him to Croatia. From there, he had to take a cab to the Croatian-Slovenian border, cross it on foot, and then get into a friend’s car who came to pick him up. It was quite tense.

How will the team operate in the next days and weeks?

For now, we are in the same situation than the WorldTeam. Like them, we decided to give the riders a week break. It’s also important for releasing all the anxiety that grew lately. With the WorldTeam, we were able to create a Zwift account for two months for each rider. What is very important is also that our youngsters can feel secure during this period of time. They are professional, and therefore have a salary, unlike many amateur teams. We also have, with Groupama and FDJ, two partners who have already shown us their support. Finally, with Marc [Madiot], we also have a great boss, who is always there and who will take care of us in the coming weeks. The combination of these three factors can only bring serenity to our riders.

Will this be enough for everyone?

I think that the current situation may be more difficult for those who are in their final year U23, and we have three of them: Sylvain Moniquet, Žiga Jerman and Lars van den Berg. For the very young ones, it will be fine. They have no pressure; they still have four years to prove themselves. On the other hand, I understand those in their last year, as they’re probably putting themselves under pressure because they need results to get to the WorldTour. But if you don’t ride and you don’t race, it obviously gets more complicated.

“Difficult to reassure by phone for months”

How can you help them to hang on in this situation?

For now, it’s all about phone calls. It is very important to talk about the situation and calm everyone, but I am also realistic. I am well aware that it can be quite easy to manage for one week or two, but that it will be difficult to reassure them by phone for months. Sylvain Moniquet, Žiga Jerman and Lars van den Berg are in different situations. Sylvain is a climber, the most important part of his season is in June, July and August. Lars is a general classification rider, so he will still have opportunities in the second half of the season. Žiga, on the other hand, is more of a Classics rider, and his big appointments were rather scheduled until the end of May. Then, there will be mostly stage races that do not suit him. So I can guess that each week of racing cancelled is an additional blow for him. However, the advantage with the WorldTeam-Conti’s link is that Yvon Madiot already knows all our riders very well, which would not necessarily be the case if they were riding for an amateur team. There are many talks between us and all the values ​​of our youngsters are available for the WorldTeam. This link is even more important given the context. That being said, it’s still difficult to stay motivated when you don’t know if your goals will be maintained or not.

What were the team’s objectives and expectations for this first part of the season?

After analysing our first season, which we had started quite early, in February, we thought that we would this time resume racing a bit later so that we would be fresher afterwards, especially in June for the Baby Giro. So we only returned to competition in March and the first objectives were Paris-Roubaix, the Triptyque des Monts et Châteaux… Then would come the Baby Giro, which is the most important race for us. Unfortunately, because we started a bit later, we only could ride three races (Ster van Zwolle, Le Samyn, Trofej Porec) before it all stopped.

Objectives will necessarily evolve, but in what way?

This is where our situation will really be different from the WorldTeam’s one. On their side, several races are just postponed while ours are purely cancelled. We would like to resume with Paris-Roubaix U23 (May 17). Therefore, it remains a goal as long as it’s not cancelled. And since I am naturally optimistic, I also imagine we may even have the opportunity to do a specific preparation for it, which would have been hard to do without this crisis. However, I am also aware that the shutdown could last longer than expected, and I fear that the resumption would only happen in June. So, I think it is wiser to give the riders a longer deadline and just warn them if there is an opportunity to start again before. Constantly setting new dates and giving false hope would drive everyone crazy.

“We could have more riders’ exchanges between the two teams”

Does this shutdown a hard blow for the team’s project?

No, not at all. I am a very positive and optimistic person. I always tell myself that there is a solution to every problem. We are in the process of adapting to the current situation. A week ago, we were still trying to change plans every day, but it was not efficient. As soon as the situation calms down, we will gather the riders in Besançon and we will restart specific trainings, in groups, as well as training programs. We stay the course and we will get back to the momentum we had until now.

How will this sequence affect the rest of the season for the development team?

If Paris-Roubaix were to be cancelled, we will then completely switch our minds to the second half of the season. There is also something to emphasize on, which is also one of the big positive sides of being a WorldTeam’s development team; we could have more riders’ exchanges between the two teams. I think that the WorldTeam will have a very heavy race program in the second half of the season if many events are rescheduled, and they probably will need a lot more riders. As for us, we will hardly have any more races from July. With the Tour de l’Avenir, the Worlds Championships, where the riders will go in their national teams, our calendar will be very light at this specific time. This should enable our riders to join the WorldTeam more frequently, as they will sometimes be on three or four different races at the same time. We will be there to help them out, but above all, it would be a very good chance for the young guys to show themselves. We have to try to see at the bright side of things. This is obviously a situation that no one wanted, but it could create opportunities that were not expected either for young riders.

Aren’t you afraid that this shutdown, right in the middle of the season, will slow down their development?

I think this is a very difficult situation for the riders, and at the same time, it is a real challenge! Those who are mentally strong will overcome the problems and find ways to deal with the situation. Those who are less strong will probably struggle more to manage this period of time. This can be revealing, and allow us to sense who is ready for the WorldTour, and who is not. This can become a new criteria, because physically speaking, all of them are strong. If they weren’t, they wouldn’t be here.

“The opportunity we offer is exceptional”

Speaking of which, what kind of rider do you look for when you’re building your roster?

At first, we focus on recruiting riders who are on a good level physically. We make a list of the riders we are interested in, we make them come to Besançon to see them, with the coaches, the sports directors, then we decide to sign them or not. Above all, I ask them to be proud to join our team, because it is an exceptional opportunity to be part of the Groupama-FDJ’s development team. However, we are only looking for riders who can potentially and eventually join the WorldTeam. Whoever does not know what to eat, who does not know how to train, who does not like to train half of the time, is not made for our team. We are only looking for riders mentally ready to give everything. We are not looking for riders who “just” want to join the ‘’Conti’’. We are already thinking of the medium and long terms.

The team has been set up while we see more and more riders getting to the WorldTour at a very young age. Do you still think the transition you represent is needed?

Personally, I still think it’s an amazing opportunity for young riders to go through a development team. There are obviously counterexamples with Remco Evenepoel and Quinn Simmons, who show that they are ready straight away, but this is not the case for everyone. Apart from the traditional supervision of a cycling team, we set up training courses like nutrition, practices, press relations, etc. This is all part of the education you need to have when you land in the WorldTour. If you get there without it, it may already be too late to learn. The opportunity we offer is exceptional and does not come twice. It’s extremely important for young guys, but I don’t think they’re the most impatient, I would say the agents behind them are. One should stay down-to-earth. It can work for Evenepoel and Simmons, but there are not fifty like them, able to jump from juniors to the WorldTour. Last year, we were in contact with some juniors who hesitated to join us saying “Maybe … I’m waiting to see if I have a WorldTour offer…” I personally think it is a pity for their development and that it is still much better, for young riders, to go through a continental structure like ours 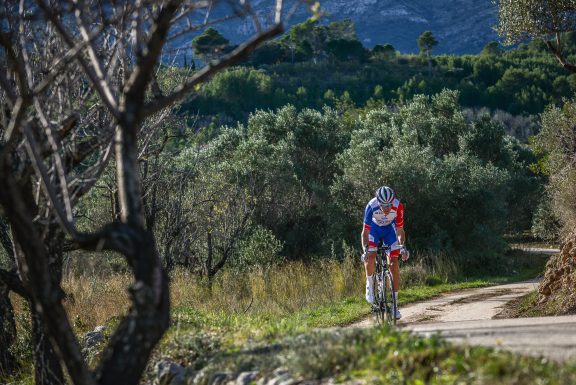