Another satisfying day for Thibaut Pinot. On Friday, the Groupama-FDJ’s climber met the expectations in the fifth stage on Tirreno-Adriatico, known as the “walls’ one”. On a steep and tortuous finale in Fermo, the Frenchman followed the main favourites until the last few hundred metres and took 13th place at the finish. He therefore climbs up to nineteenth overall before the real mountain stage on Saturday.

It was another opportunity for the punchers and climbers this Friday on Tirreno-Adriatico, but quite a different one from the previous day. After a rather steady climb up to Bellante, it was time for multiple steep climbs towards Fermo, in a typical day of the “Race Between the Two Seas”. “The stage was short but still difficult, with some steep slopes in the end and a finish in a small village uphill”, said Sébastien Joly. On this fifth day of racing, a lot of riders wanted to get involved in the breakaway and the latter only went after fifty kilometres. “The start was quite fast”, confirmed Sébastien. “Thibaut tried to follow the moves a bit on the first climb (not categorized) around km 25, but they didn’t let him go. It’s quite logical given that he is still well positioned overall and that he is someone they can be afraid of…” “I left a bit of energy at the start of the race in order to take the breakaway”, said the Groupama-FDJ’s leader. “They made me understand that they didn’t really want me to be in front. I was a bit disappointed not to be in the breakaway, but then I concentrated on the final”. Meanwhile, the leading group made up of twelve riders including Davide Ballerini (Quick-Step Alpha Vinyl), Warren Barguil (Arkéa-Samsic), Gianluca Brambilla (Trek-Segafredo), Xandro Meurisse (Alpecin-Fenix), Benjamin Thomas (Cofidis) or Nelson Oliveira (Movistar) saw its gap growing, and eventually got four minutes at best with fifty kilometres to go.

“It gives me confidence”, Thibaut Pinot

Approaching the final circuit, the gap dropped to three minutes but remained quite important while the bunch also lost many riders in the first time up to Fermo. Only about forty riders were still there, and Thibaut Pinot could count on the support of Tobias Ludvigsson. “Tobias was in a good day and managed to position him well,” added Sébastien. “We always manage to have one or two teammates with Thibaut at the right time, and that’s the most important thing”. While the breakaway approached the last twelve kilometres made of ups and downs, with enough margin to go for the win, the overall contenders also fought slightly behind. “I tried to do the best I could because I also need to regain confidence and finish with the best ones,” said Thibaut. “Even though I spent some energy at the start of the stage, I am happy to still finish with the favourites and that gives me confidence for tomorrow”. “It came down to legs, and Thibaut finished thirteenth on the stage, and ninth among the best”, supported Sébastien. “It’s a bit better than yesterday. We saw him quite serene on the bus. It’s quite a good day. We feel that confidence is gradually coming back”. While Warren Barguil got the win from the breakaway, Thibaut Pinot gained eight places overall before another big test on Saturday, on the double ascent of Carpegna (6 km at 10%). “Normally, this stage is the one that suits me the best among the three”, concluded the French climber. “I hope to recover well and feel even better tomorrow. Anyway, I’m satisfied with my day, and it supports what I said yesterday: it’s getting better and better”. 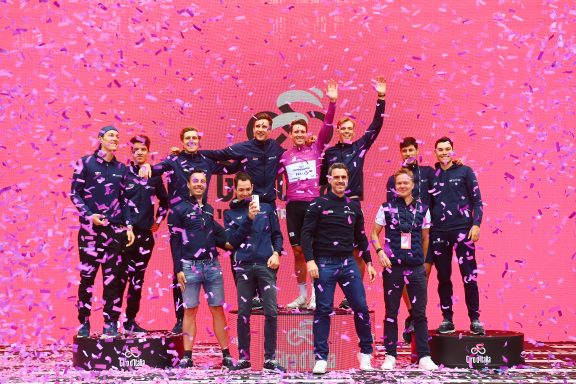 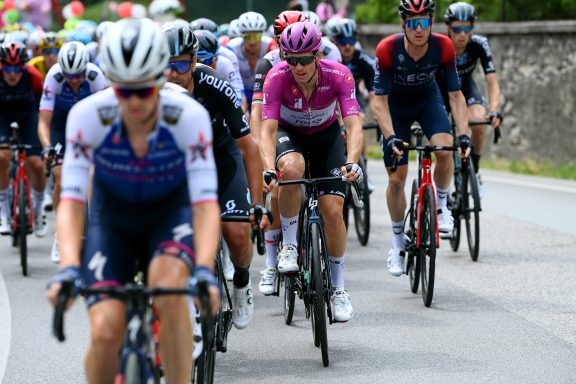