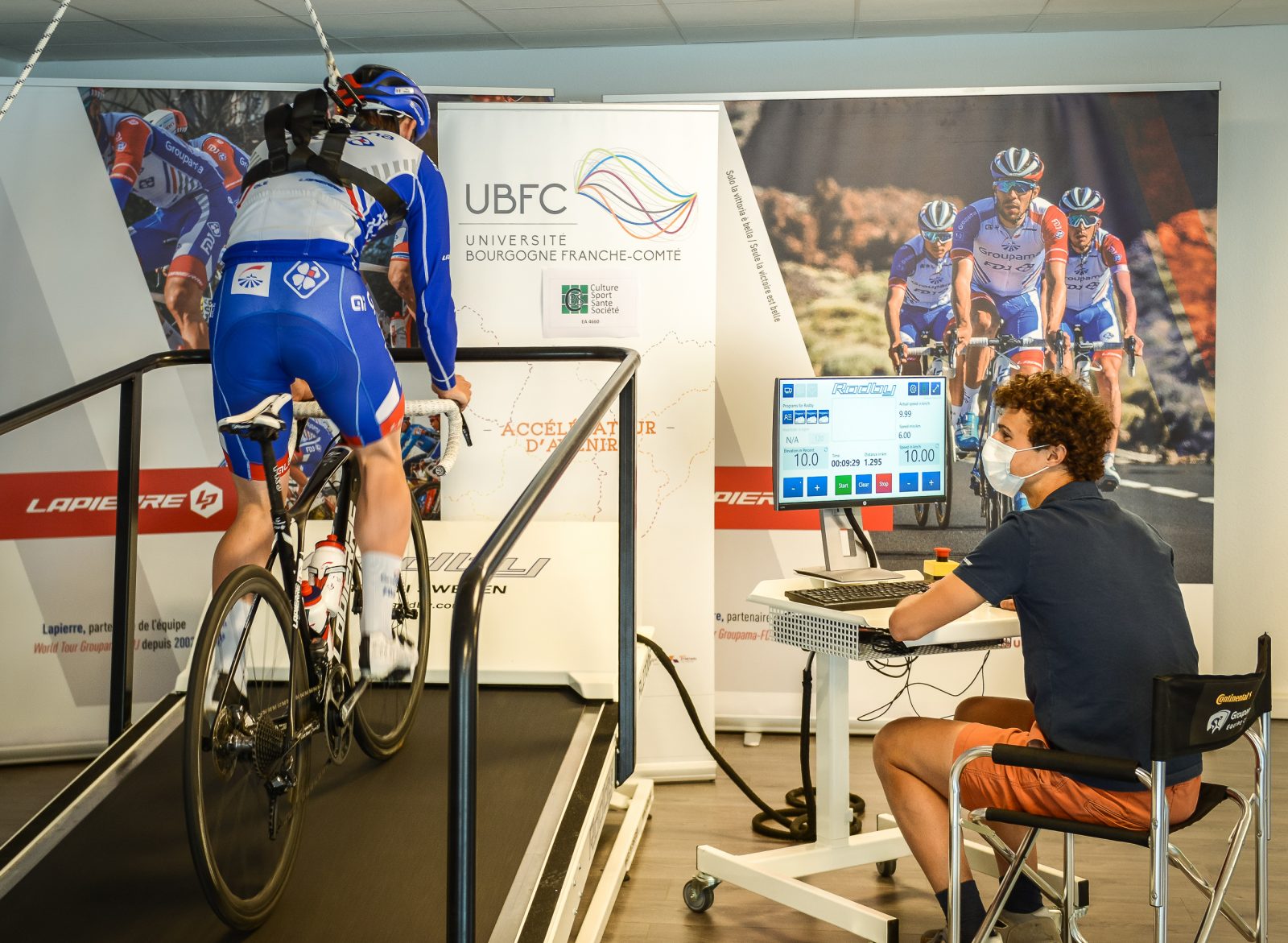 For more than a year, the Groupama-FDJ cycling team has been enjoying its own Performance Centre in Besançon. This Centre also hosts a research laboratory like no other on French territory. Tempted by this dual project for a long time, the performance department’s director Frédéric Grappe was obviously delighted to see it come true and tells us about the outlines and the details that make it so unique.

Frédéric, can you first explain us the genesis of the COPS (Optimization Complex of Sports Performance)?

It all started with a talk with Alexandre Chouffe, whom I trained in the early 2000s when he was a professional rider. We lost contact but he got back in touch a few years ago. He was running a gym but wanted to go further in the sports area. He knew it was my intention too, so he came to me. He had some land in Besançon and wanted to use it to build something innovative. We then imagined what could be an interesting thing to set up for the French sport. The idea was based on an observation: there was not a place where everyone could come and enjoy the same facilities as top athletes. The goal was therefore to allow ordinary people to access these facilities and thus bring together recreational sport and elite sport. The objective was to later integrate new technologies into this building and to conduct research in the sport and health fields. That was the basic project.

“All sports combined, we are the only ones in France”

How much did the arrival of Groupama alongside FDJ speed up the process?

Within the organization, we had an application for a development team ready for a while. I had even met officials from the city of Besançon who had offered me accommodation solutions, but they were not completely satisfactory. When Groupama came along, the “Conti” project took shape for good, and when we had to find a place in Besançon for the team to settle in, I then revived the project with Alexandre. With him, Marc Madiot and David Le Bourdiec, we discussed the possibility of occupying part of the building to host our Conti team, establish the offices of our Performance Centre and set up a research and development laboratory. We quickly agreed, we got the building permit and the project started very quickly.

How is the team allocated within the COPS today?

We occupy about a third of the building. The other two third are public. Our private part is made of three different areas: first there are the Performance Centre, medical Centre and continental team’s offices. Then there is the Conti’s service course workshop, with the bikes, the warehouse part, the garage for vehicles, etc. Finally, on the same floor, there is a large area for the research and development laboratory.

Can you tell us more about this laboratory?

We actually have quite an original collaboration agreement with the Sports University I used to work for. We have set up what is commonly called a LabCom (Laboratoire Commun in French, Joint Laboratory in English). I have always wanted to keep this important research relationship with the University, because we are more powerful together than alone. We have therefore submitted a file to the National Research Agency (Agence Nationale de la Recherche en français), which belongs to the Ministry for Higher Education, Research and Innovation. We had to defend our application before a college of scientists, which finally validated our project. We then obtained a substantial subsidy and were able to pool the material and human resources of the Groupama-FDJ cycling team and those of the Franche-Comté Sports University. Today we have a unique private/public research laboratory in the sports area and the NRA, the highest body of research in France, recognizes it. We are quite proud of that. The team therefore has the privilege of having a state-approved research laboratory. All sports combined, we are the only ones in France. The model is very innovative, but our goal is also to develop it, not to just make a “one-shot” thing. Now, for example, there are former University research colleagues who come to work for the team within the LabCom. Thanks to the subsidy, we were also able to recruit staff: an engineer who works on innovation in terms of equipment and a PhD student who works on a subject that is important to us for the future, the relationship between cycling and neurophysiology, between the brain and physical effort.

“Our two scientists are doing a great job”

Can you introduce these two scientific “recruits”?

They are both named Victor. With my University’s colleagues, we had defined two profiles for our LabCom project: a PhD student and an engineer. We first had to find two people who wanted to come and live here, who were obviously motivated and who were ideally oriented towards cycling. The first one, Victor Scholler, had a master’s degree and was trained at the Reims’ Sports University. He worked on cycling and was at Decathlon. He was interested in the idea of ​​taking a PhD so we took him. The other one is Victor Simonin. He is a cycling fan and an engineer trained at Polytech Annecy-Chambéry. For his research project, he worked on a carbon wheel. We were lucky to find these two. Besides that, they’re young, which is great. They quickly said yes, have been on the team for over a year now and are doing a great job. They “belong” to the LabCom but mainly work on our team’s themes.

What advantages do the Groupama-FDJ team and the Franche-Comté Sports University derive from this partnership?

By combining the material and human means, the striking force, the power of research and development, is simply doubled. And it’s huge. For example, I have a colleague who knows neurophysiology really well and he brings us a lot, as it is a skill that we did not have in the team. It’s a great example of pooling. Our engineer has also been doing a very good job for a year and we are now making some pieces by ourselves. Having all that is very important for a team like ours because we know that cycling is a sport that is increasingly focused on science. We are not only working on the athlete but also on the equipment, and these two dimensions are now “squared”. In addition, within the laboratory, we can totally undertake projects that are 100% dedicated to the Groupama-FDJ and that will not interest the Sports University. And vice versa. The goal is that everyone benefits from it and there are a lot of overlapping themes anyway. If in a given project, only 20% of the research can interest the other party, it is still 20%.

“The team really has achieved something”

What materials and equipment can the laboratory rely on?

Above all, we have a nice surface area, with almost 150 square meters of private laboratory. Inside, we can therefore welcome some of our Sports University’s colleagues and install some of the equipment. By pooling our resources with the University, we also make real savings. Thanks to the subsidy, we were also able to acquire new equipment. We now have a large, state-of-the-art treadmill that allows us to make some tests. Before, we had to go through the University and it was not always easy. We also have systems to work on brain stimulation, with special helmets to record signals. This is for example University equipment that is shared. So are a large number of installations and tools, and everything is gathered in the same place, our place. More generally, talking about the COPS building, which is public, there is also a large gym of 500m2, where our young Conti riders can be trained by coaches for physical preparation in connection with our trainers. There is also a state-of-the-art cryostimulation booth. It is not ours, but the Conti riders are able to use it. There are saunas, and a dozen apartments to simulate hypoxia will open in the top floor in September. It’s basically a pretty unique building and that’s what we wanted. I think we have a structure that will be useful to the greatest number. If tomorrow M. Anybody wants to do 15 days of hypoxia, he can rent an apartment, with a defined altitude, be followed, train in the building or outside, and why not do a test with us in the laboratory if he needs it or wants it. Because we, the Groupama-FDJ cycling team, will also open our doors. There is a real demand and the laboratory will therefore be open for some follow-ups and services for the general public. Obviously, we will not be able to take on all requests, but we will still be able to offer monitoring and evaluation to the man or the woman next door. It’s a beautiful novelty.

Are you proud to see a centre and a laboratory of this stature develop?

First and foremost, I’m proud for the team because it’s something I’ve always dreamed of. I am often asked “why are you still here?”. I always replied that I was not interested in looking elsewhere knowing that I am in a team that has always trusted me and that has always wanted to develop. To look further is what matters. In this sense, the team really has achieved something, and I am proud of it. I’m glad it was done in Besançon, but it could have been elsewhere. This is actually more about history, given that I have developed this area here and have always said that performance is not moved; it is reinforced where it is created. Everything is going well here, most of the coaches come from here and it has become a real stronghold in terms of research. It happened that way and it’s good, but what really interests me is to see the team grow, to see it flourish in this innovation process and to note that the riders feel it, see that they are taking part in it and notice what is being done around and for them. 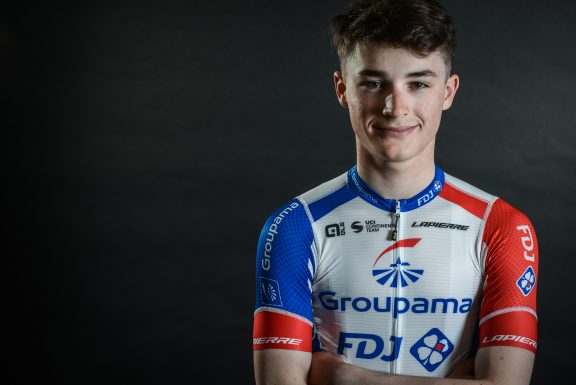 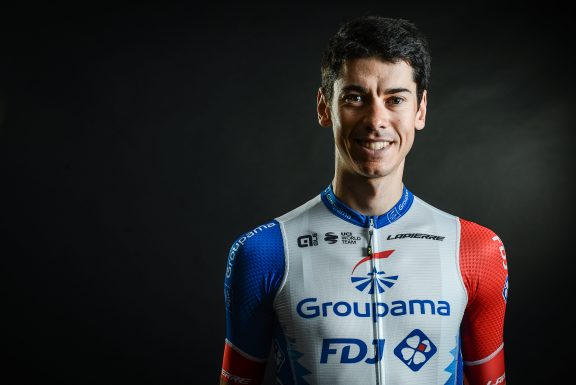 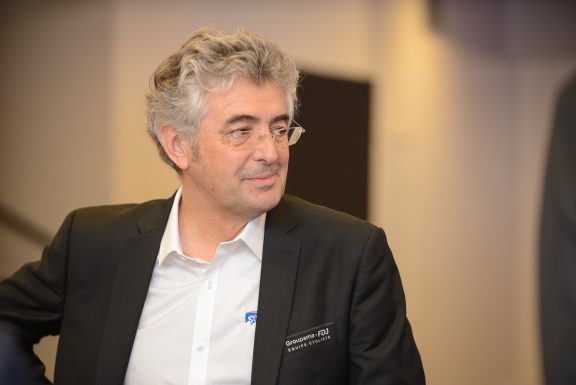