It’s finally racing time for the “Conti” Groupama-FDJ! A few days after their WorldTeam’s elders, the youngsters are also about to gradually resume competition – Žiga Jerman and Alexandre Balmer having already raced on home soil -. Some will give a hand to the mother team while others will be looking for results with the Conti. A few hours before the season restarts, the sports director Jérôme Gannat tells us about the next three months’ guiding principles and functioning of the team.

Jérôme, what is the team’s state of mind ahead of the season restart?

It is obviously very good. Everyone is motivated and eager to get back at it. There is a lot of excitement. Riders are starving to race. They are coming off a long period during which they rode indoors or trained solo before getting back to specific trainings in Besançon for a month. Training is good, but first and foremost they are competitors. Their purpose is to put on a bib and see a finish line.

How did this final month of preparation go in Besançon?

It went as we expected. The conditions were good in terms of weather. It allowed us to do a lot of collective training but also to work on more specific areas such as the time trial and the team time trial. We also took advantage of being close to the Vosges to do a few rides to la Planche des Belles Filles, among others. We had also done a recon of the Tour de l’Avenir stages in the Jura before we learned that it would be cancelled. For some, it was a real disappointment as it is the main U23 event. Sylvain [Moniquet], Lars [van den Berg], Yakob [Debesay], Théo [Nonnez] and Žiga [Jerman] were supposed to do it. Even though the race was reduced, it was still an ideal one for climbers with four interesting stages for them. It was different for Žiga, who was only aiming for the first stage, but he still had some ambitions. Now we will have to move on and make the most of all the races that we’ll get to do.

Precisely, was it difficult to build a good program for the end of the season?

As the team is only a year and a half old, we have little perspective. But last year, the second part of the season, starting in July, was very light due to the national championships, national selections for the Tour de l’Avenir, the Worlds and the Nations Cup rounds. This year, because some races have been postponed, we will have a more substantial end of season program. It is very good, and we must be happy that some races have managed to survive and find new dates, such as the Tour des Pays de Savoie, the Baby Giro and the Ronde de l’Isard. This allowed us to add 15 days of racing more or less to our end of season program.

You did not want to overload the team’s program though?

We still looked for a few races here and there. When you look at the UCI calendar, there are indeed quite a few class 2 races, but everything is a bit far away. Then, above all, we wanted to maintain our goals in the Baby Giro and the Ronde de l’Isard, in particular. We could have had the opportunity to compete in interesting races elsewhere, such as the Tour of Hungary or the Tour of Czech Republic, but our priority was to focus on our U23 calendar and keep the program planned at the start of the season. Therefore, except for the races that were postponed, we haven’t really added any events to our calendar. We will just be competing in the Saint Brieuc Agglo Tour in mid-August, and we will maybe also add two or three National Elite races to fill in some gaps that we may have in our program. Also, we’re going to be involved with the WorldTeam, so we wanted to free up some race days so that our riders could race at the next level. This is also why we did not try to find all the possible races in Eastern Europe. If the Tour de l’Avenir had been maintained, for example, it would have concerned five of our twelve riders. It just goes to show that we can’t be everywhere. We couldn’t afford to plan races every weekend. We wanted to focus more on races with the WorldTeam than to set a very busy calendar for the Conti.

“The climbers will have opportunities to show themselves”

The riders’ moves to the WorldTeam will resume this week with Clément Davy on Milano-Torino but also Jake Stewart and Lewis Askey on the Mont Ventoux Dénivelé Challenge. Are these moves supposed to be strengthened?

In any case, it’s a very good opportunity in this period. Usually, the WorldTeam takes stagiaires but there was no reason for it to happen this year as we have the riders able to compete in these end-of-season races. There have already been riders’ moves at the start of the year and there will be more in the coming weeks. We should also recall that the main objective remains to eventually bring riders from the Conti to the WorldTeam. Normally, the exchanges should have taken place throughout the season. This is what we planned this winter. It could not happen so they will therefore be a bit strengthened at the end of the season compared to last year. That being said, although the WorldTeam’s schedule is busy, all 28 riders on their team will also be keen to race. This will perhaps make a little less room for us than in a normal season, where some might end their season earlier or have a lighter schedule at the end of the year. This time, they will logically all be ready to race for three months. The other small disadvantage is that exchanges can only be done for Class 1 and ProSeries races. However, the races that have been moved are mostly WorldTour ones. In the end, the calendar is not that big for us. Especially when you learn that the Grand Prix de Fourmies, Paris-Bourges and the Tour de Vendée are cancelled. It’s a pity because it could have been six spots for the Conti riders.

With the various fronts (Conti, WorldTeam, National Teams), do you think that all your riders will have the opportunity to show themselves?

Obviously, the goal was that everyone could race, including our three riders in their first year U23, even if they will still have opportunities next season. That being said, when you look at the program, you have to be realistic. Climbers and punchy riders will have a rather interesting schedule at the end of the season with the three stage races we mentioned before. This gives them about 15 days of racing. There will also be the world championships, which suit them, and the Piccolo Lombardia at the end of the season. Even with the loss of the Tour de l’Avenir, they still have a good program. For them, there is no problem. They will have the possibility and the opportunities to show themselves. For rouleurs-sprinters, on the other hand, the U23 calendar is much less favourable and we rely more on them for races with the WorldTeam. As far as we are concerned, we will not have races that are really suited for these types of riders, as the Classics, for example, have been cancelled. There weren’t either too many postponements for Class 2 races, which usually fill up our schedule and which quite often suit rouleurs and sprinters. Therefore, as soon as it will be possible, they will race with the “big boys”.

“To be opportunistic and live the moment”

For the Conti, what will be the major goals of this end of the season?

These last three months will definitely be more focused on climbers. We have a very consistent team and I think they will perform well in the mountains of the Baby Giro, the Ronde de l’Isard and the Tour des Pays de Savoie. Once you’ve said that, you have to keep in mind that we are coming off of a five-month period without competition, having only done three days of racing in March. Actually, we got the feeling of being at the start of the season. There are also riders who arrived last winter, and although we spent a lot of time with them for the past month in Besançon, we don’t really know them yet in competition. Even if time is running out, and we hope to perform well quickly, this Tour des Pays de Savoie will still be a bit of a discovery of our riders. This will be the first time we see them in action in a mountainous race. We obviously know them through training, we know what they are worth, but competition remains the benchmark. We’re going to sort of discover them and it’s a bit special because it’s August. In any case, on the Tour du Pays de Savoie, for example, we have chosen to keep our climbers rather than send them to the Mont Ventoux Dénivelé Challenge.

What has been, or what will be, your speech towards the riders for the next three months?

We’re going to take the races one after the other and make it clear that we have to move forward. We will be at the start of the Tour des Pays de Savoie on Wednesday but we don’t know how long all this can last. You really have to do all the races 100%. No more looking back. We must be opportunistic and live the moment. Despite everything, we are still lucky to be at the start of a race. The riders will really have to show great motivation, which I have no doubts about, but above all seize all the opportunities that may arise, especially to win races because this year will be very, very short. They will need to approach each stage as if they were 14 year-old riders again, when you give 100% on your first races, on all races, no matter the course or the weather conditions. They will have to show a real desire and pleasure in being back in the race. At a certain point, the legs obviously decide on the performance, especially in difficult races. But in these complicated moments, you will need to see that little light that allows you to move forward and go further. We’ll need to be always aggressive. It’s a special and difficult season, especially for those in their fourth year U23, and we know it. But at a certain point, you also have to show yourself on the bike, because it is still a professional world. Whether we do one race, two races or ten races, we have to do them all 100%. 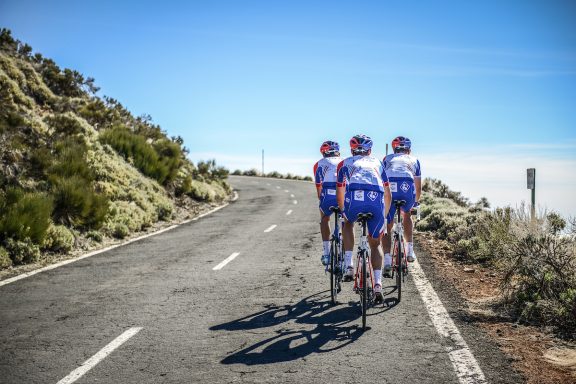