After a crazy first half of the race on Friday, the breakaway again got the win on stage 19 of the Tour de France in Libourne. Matej Mohoric got the better of his opponents at the finish, as the main peloton arrived over twenty minutes later with Stefan Küng and the rest of the team. The Swiss rider tried to recover as much as possible today, already thinking of the time trial in Saint-Emilion on Saturday. It should be the last chance of victory for him and Groupama-FDJ on this 2021 Tour de France.

From the Pyrenees to the Bordeaux vineyards, the Tour de France made its way from South to North on Friday in what was an almost complete straight-line to Libourne. A little more than two hundred kilometers, mostly flat, were on the menu in this stage, but the scenario was left to be made. “When we did the briefing this morning, it wasn’t clear whether we were heading for a breakaway victory or for a mass sprint,” said Yvon Madiot. “We still thought there would be some action, but we didn’t expect that there would be that much of it…” Yet, a six-man breakaway managed to go quite early on while the first kilometres got a bit messy with a mass crash, which also stopped David Gaudu and Stefan Küng for a moment. Alpecin-Fenix ​​ even tried to control the race to give their sprinter a chance, but things got completely crazy after fifty kilometers or so. Following the intermediate sprint, numerous attacks occurred in the bunch, with many teams keen to take advantage of this last “breakaway day”. A big chasing group made a gap leaving Mont-de-Marsan, after seventy kilometers, but it took more than an hour for the bunch to really let it go.

A breakaway of about twenty riders therefore took the lead and went on to fight for the stage victory. “Two of our riders had the opportunity to follow the moves today, but it didn’t work out,” said Yvon. “We were not wrong in asking them to be careful, but we are at the end of the Tour and fatigue is really taking its toll”. Within the pack, the pace reduced drastically while Matej Mohoric headed off to collect his second stage victory in the race. All the Groupama-FDJ’s riders finished twenty minutes later in the bunch. Among them was obviously Stefan Küng, who was already focused on the final time trial of the Tour scheduled this Saturday between Libourne and Saint-Emilion. “This is our last chance on this Tour,” said Yvon. “We will do everything we can to put Stefan in the best conditions. But he knows how to do it, he knows how to prepare for it and knows how to approach it. We trust him”. Julien Pinot, Swiss rider’s coach, added: “It is difficult to say if this course suits him more. Stefan excels both on flat courses and on slightly hillier courses such as Laval. Tomorrow is more of a rolling one. We will go through the vineyards, on small roads, with a lot of turns. It’s a course that suits him and it’s a nice course, which is going to be very fast. That being said, it can also suit Van Aert or Pogacar. If he has the same shape as at Laval and is motivated to go for another stage win, the yellow jersey will also be a favourite tomorrow.” 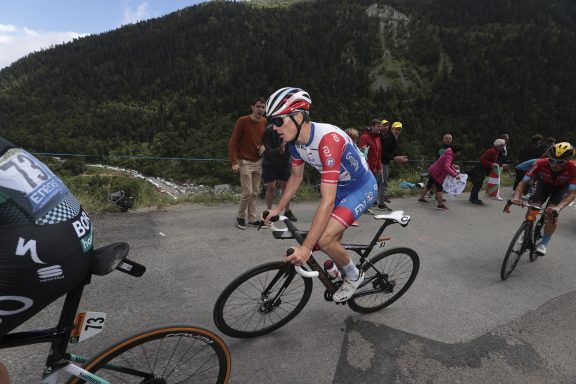