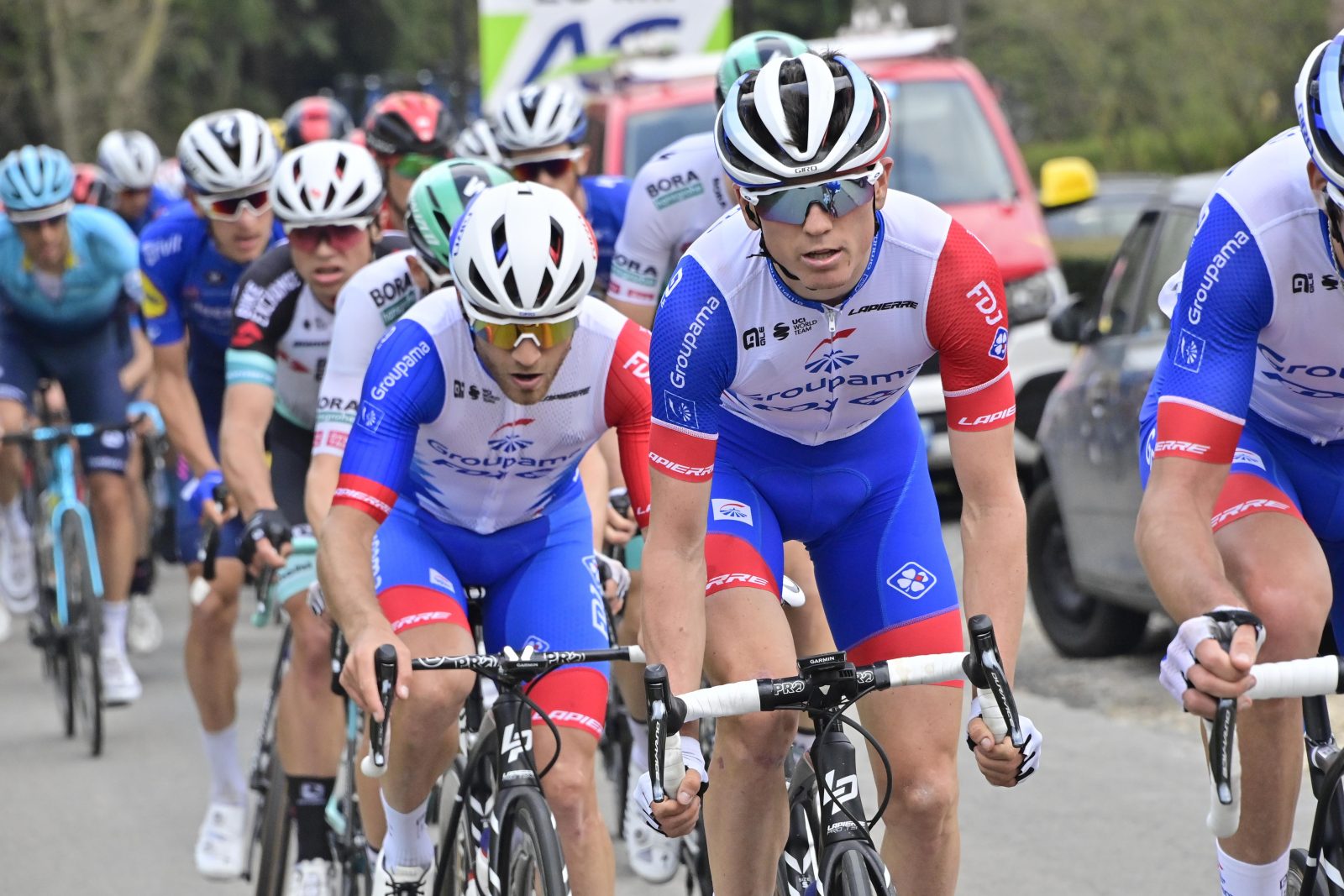 The 85th edition of the Flèche Wallonne was no exception to the rule on Wednesday. As usual, a small bunch contested the victory at the bottom of famous and frightening Mur de Huy. Ninth in his first participation in 2017, David Gaudu managed to do better this year. He then took a very good seventh place at the top, after a remarkable team effort throughout the day. A good signal before the last Ardennes Classics on Sunday: Liège-Bastogne-Liège.

“The good things with David is that he’s always positioned”, Franck Pineau

On Wednesday morning, after the start in Charleroi, the fight for the breakaway lasted for about 15 kilometers before a group of eight men managed to get away. “As for us, the start of the race was quite calm,” said Romain Seigle. “We didn’t get too involved in the battle because we know that this race is always played on the final circuit. So we let the others handle it”. Diego Rosa (Arkéa-Samsic), Alex Howes (EF Education-Nippo), Sylvain Moniquet (Lotto-Soudal), Louis Vervaeke (Alpecin-Fenix), Sander Armée (Qhubeka-Assos), Maurits Lammertink (Intermarché-Wanty Gobert), Simone Velasco (Gazprom-RusVelo) and Julian Mertens (Sport Vlaanderen-Baloise) were then able to get a five-minute lead while William Bonnet led the way for his colleagues throughout the first half of the race. “We really got into the race as we approached the circuit,” Romain said. “Serious things were set to start from the Côte de Gives on, after 115k. We then had to be positioned before the first time up the Mur de Huy. We did that well”. After the first lap, including the climbs of Ereffe and the Chemin des Gueuses, the Groupama-FDJ was still in numbers for the second climb of the Mur. “There were still six of us in the pack when we started the last lap,” Romain said.

Shortly after, however, Matthieu Ladagnous was caught in a crash while Valentin Madouas was delayed by that same incident. “He wasted some energy to come back and that did not play in our favour”, added Franck. “On the last lap, we took control with Bruno in order to remain positioned and so that David could be calm and relaxed,” Romain said. “It went very well for us”. David Gaudu and his teammates thus never left the very first positions of the peloton during the last lap, in particular on the climbs. “The good thing with David is that he’s always positioned. Always”, insisted Franck. “You don’t even have to wonder if he’s there or not. He’s there, all the time! As long as he’s in good shape, he’s in the top ten of the bunch at the decisive moments for sure. This is a real advantage for his teammates. He starts to take on great responsibilities and to realize certain things. He’s growing quickly, and in the good way”. A main leader on Wednesday, David Gaudu eventually crossed the top of Le Chemin des Gueuses in the first positions, in a bunch that did not allow any move to go away.

Only Maurits Lammertink, a member of the morning breakaway, held on approaching the Mur. In this final part of the race, Rudy Molard proved particularly valuable to David Gaudu “as expected”. Then, the stage winner on the Tour of Basque Country tried to finish the job off. In the very first line on the first 600m of climbing, the Frenchman could not however go with Roglic, Alaphilippe and Valverde when they accelerated 300m from the top. However, he fought well just behind to take seventh on the day. “Honestly, I think David could be 4th or 5th today,” said Franck Pineau. “He is a bit slowed down twice in the Mur. On such slopes, the energy he loses to get going again and regain half a kilometer/hour is what may be lacking to get fifth. That being said, we are where we should be, we did a good climb and we were in the mix with the best. David didn’t seem disappointed at all. The climb was done in record time (2’40), and this kind of fast, short and steep climb is not his greatest specialty either. Still, he loves this race and he is more than anything very strong at the moment. We could have gained two or three places, but the podium still seemed impossible today”.

If David met the team’s expectations with the top 10 on Wednesday, Franck Pineau also wanted to praise the team effort. “In terms of quality, the work was way better than in the Amstel,” he said. “I liked it. Today, I also want to remember the work of the domestiques. They took responsibility and no one failed at his job. They sacrificed one for the other. There is nothing we can blame them for. This bodes well for Liège. There is no reason that we cannot do it again on Sunday. I’m very confident, we’re doing everything we can. The legs David had today, he will necessarily have them again on Sunday”.