The very first mountain stage of the 2021 Tour de France already gave a clear trend of the general classification on Saturday. At the end of a very lively day towards Le Grand-Bornand, Tadej Pogacar conquered the yellow jersey while David Gaudu proved to be one of the very best climbers of the field. With the exception of the Slovenian rider, the young Frenchman did not lose time to any of his rivals and even gained ten places overall. Prior to the second stage in the Alps on Sunday, he sits in ninth place, just 1’14’’ off the podium.

“A bit of a crazy day”, Thierry Bricaud

After he almost perfectly got through the first seven stages from Brest to Le Creusot, David Gaudu was delighted to finally see the mountain looming in the Tour de France onSaturday. The weather was certainly not the most welcoming at the start of Oyonnax, where he got his first pro win on the Tour de l’Ain, but it did not actually bother him. Fortunatelyso, as the action started from km 0 and almost did not stop for the whole day. “It started super fast in the climb, and we knew that it was going to happen,” said Bruno Armirail. “However, it did not ease off at all for a while after that”. Despite relentless attacks, the peloton was packed at the intermediate sprint, although only sixty riders or so were still there. Eventually, it took 70k and the second listed climb of the day for a group to go up the road. “It was a bit of a crazy day, something we are not used to,” said Thierry Bricaud. “It’s a bit like the Tour overall this year, where everything is a bit upside down. These are not the classic scenarios but we have to be able to adapt. It wasn’t especially planned for Bruno to follow the moves at the start, but since it exploded quite earlyand all the teams were trying to put a rider in front, we gave Bruno carte blanche“.

The French Time Trial Championship’s silver medallist thentook place in a group of eighteen men just before mid-race. “I followed 2-3 attacks and ended up in a strong breakaway, with great climbers. It wasn’t necessarily planned, but David told me I could go, so I gave it a try,” he explained himself.“Bruno managed to get into the breakaway, and it was good to have someone in the lead”, added his leader. “In the back,Stefan Küng was with me following the bunch’s pace up to the bottom of the Col de Romme”. After the climb of Mont-Saxonnex, Bruno Armirail was slightly distanced by the leading men and therefore completed the Col de Romme at his own pace before being caught by his leader. In this same climb, the fight for the general classification started with Tadej Pogacar’s double attack, which no one could cover. Actually, David Gaudu just kept his pace. “Pogacar attacked and was just stronger than everyone else today,” he said. “I was able to take a turn for David and give him a gel,” Bruno added. “I could help him a little bit.“

“David is focused on what he needs to do“, Thierry Bricaud

In the last climb, the Col de la Colombière, Tadej Pogacar continued to widen the gaps over his rivals while David Gaudu’s small group got closer to Richard Carapaz, who remained in-between for a long time. The Ecuadorian was finally caught on the downhill to Le Grand-Bornand, Pogacarbeing the only rider to make gaps over his competitors today. He did not win the stage though, as Dylan Teuns secured the victory. David Gaudu finished in 15th position four minutes later. “Like he’s been doing for the past week, David is focused on what he needs to do,” Thierry said. “He’s confident with his strength and his legs. He knows that he has to ride smart. He follows the best and we see that the overall is shaping quite naturally. It’s still a good day for him. It gets him back in the general ranks, which is his common thread for the next two weeks”. On Saturday night, the rider from Brittany sits inninth place in the standings, just over a minute from the podium. “It was a good day, but it is hard to know your exactfeelings with the rain, the cold and the intensity of the previous days,” he said. “You just have to deal with it”.

He might have to cope with it once again on Sunday, between Cluses and Tignes for the second alpine round through the Col des Saisies, the Col du Pré, the Cormet de Roselend and the long climb to Tignes over 145 kilometers. “It can be a crazy stage once again, because it is even harder than today”,foresees Thierry. “More importantly, there is a summit finish in Tignes, which can create gaps between the best. For David, it’s a good thing, but he still needs to be there with his opponents at the bottom of the last ascent. The days are so crazy that some riders far in GC could take advantage of this day to gain positions. Everything is possible, so you have to stay focused”. The Groupama-FDJ’s leader concluded: “It could be even colder, and it will be even harder. Hopefully the shape will remain as it is, or even improve a little. In the evening, we’ll take stock”. 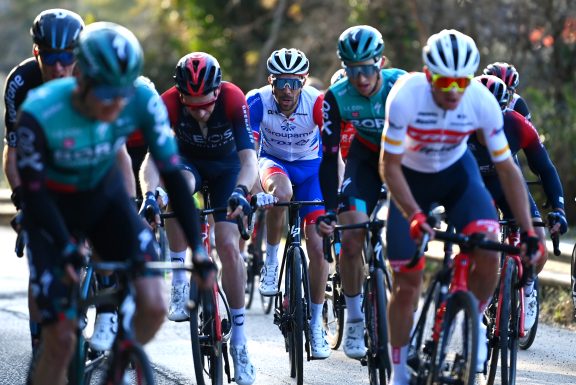 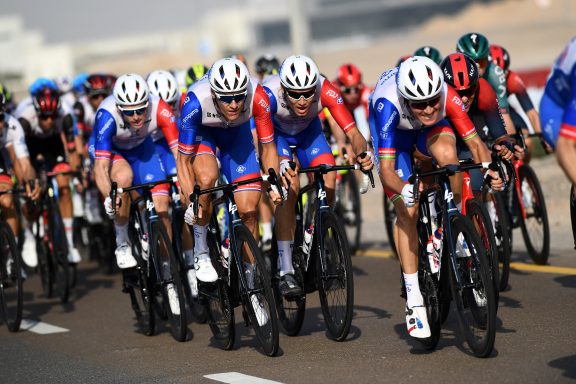