David Gaudu met expectations in the first GC contenders’ appointment of the UAE Tour. In Jebel Hafeet summit finish, after a climb where the fight started very early, the young rider from Brittany took a very decent fourth place. Adam Yates (Mitchelton-Scott) got a solo win, 1’30 ahead of the Groupama-FDJ’s climber, who remains in contention for a final podium before the second round on Jebel Hafeet scheduled on stage 5.

The first of two most important days for the UAE Tour’s overall classification was held today, through 184 km towards Jebel Hafeet, the usual UAE Tour’s decisive climb. “The stage was still quite long, but also flat until the final climb,” said Sébastien Joly. “Above all, it was extremely hot today and that was the real news of the day. Until now, we had around 30-32 degrees, and it was pretty hot already, but today the temperature went up to 35 and it felt even warmer.” Considering the stage profile and the weather conditions, there was no many riders interested in going up front. Four men nevertheless took the lead after around twenty kilometers, namely Stijn Steels (Deceuninck-Quick Step), Jasper De Buyst (Lotto-Soudal), Victor Campenaerts (NTT) and Umberto Marengo (Vini ZABU-KTM).

“Fourth place is not that bad considering the competition”, David Gaudu

“For us, the idea was rather to stay calm until the final climb”, explained Sébastien Joly afterwards. “Especially since the UAE team was riding on home soil and had Tadej Pogacar, one of the favorites, in its ranks. It was normal for them to pull all day”. The classic pattern then set in and the breakaway took up to seven minutes’ advantage before the pace increased in the last hour and the favourites’ teams came forward to position their leader in the last twenty kilometers. Groupama-FDJ was no exception. “In the finale, the whole team did a great work,” said Sébastien. “Arnaud’s lead-out train supported David, as planned, with Jacopo, Ramon and Ignatas. Arnaud himself was the last man to position David at the bottom of the final climb. Then, David had still Bruno, who did a good beginning of the climb, he stayed quite a long time with his leader.”

Unlike the previous years, when small gaps between the best were made near the summit, the battle started early this time, with Adam Yates (Mitchelton-Scott) launching a solid attack with six kilometers to go. “David followed his attack, so did Lutsenko, but Yates then proved to be stronger than the rest”, said Sébastien. The French climber agreed with his sports director while reviewing his performance. “I had rather good feelings on the climb”, said David Gaudu. “Yates was much stronger than us and I tried, as much as possible, to manage the climb at my on pace. I finish fourth and it’s not that bad considering the competition there is on this race. I just regret I did not start the sprint earlier, or at least took the wheel of Lutsenko when he launched it to go for third place. But that’s how it is.”

“Everyone was really committed”, Sébastien Joly

David Gaudu eventually crossed the line 1’30 after the winner, and thirty seconds behind the Tadej Pogacar, who was second. He did make a good assessment of this first big test. “It was a good day overall,” he said. “The guys worked very well for me today. They protected me from the wind when there was some and positioned me at the bottom of the last climb as we hoped for, so that I could approach it in the best possible conditions. Everyone did a really great job today. And as far as I’m concerned, the feelings are already better than the ones I had in the Tour de la Provence”. “Everyone was really committed and did a very good work, so everyone was satisfied at the finish”, confirmed Sébastien Joly.

The sprinters are back in business tomorrow on the UAE Tour, meaning Arnaud Démare will get a new opportunity, and David Gaudu should be able to recover before the rematch in Jebel Hafeet. “There is still a finish at the top of this very climb on Thursday”, told Gaudu, now fourth in the general classification. “The race is far from over. We know things will go differently on Thursday. I think there will not be the same attacks, that we will play more cat and mouse. They also announce tricky stages with possible echelons this weekend. We have a team able to deal with this, we will see if there is wind indeed and how it goes, while hoping to win a stage with Arnaud. In any case, the group is going well.” 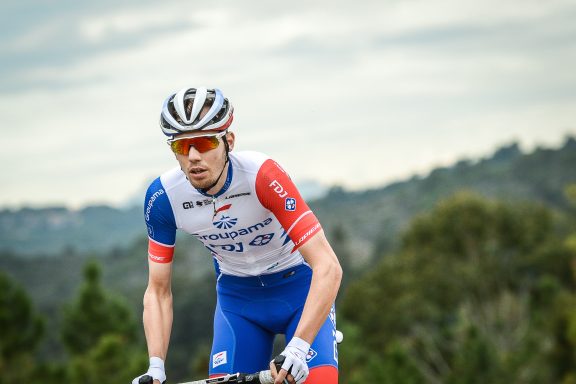