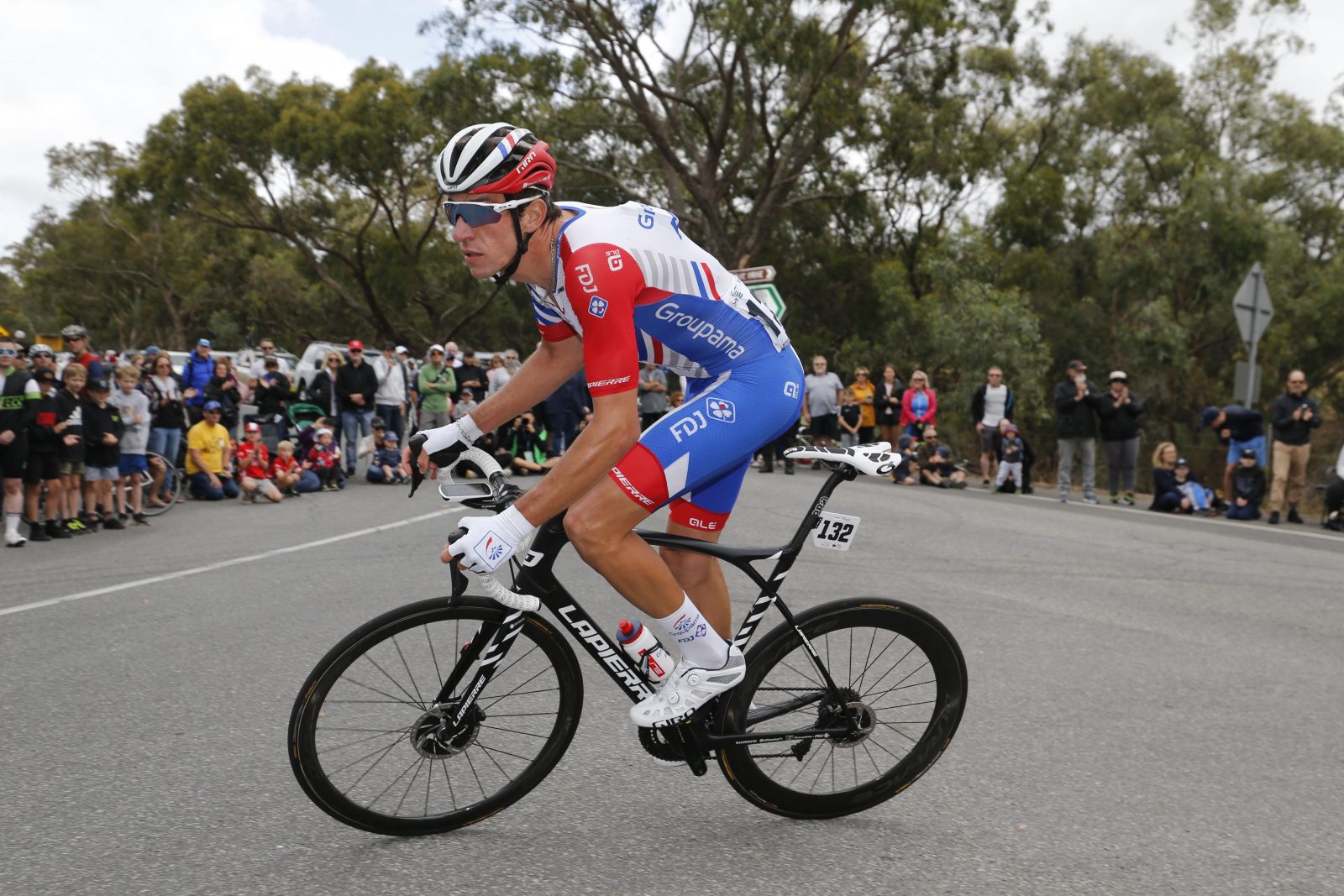 The Tour Down Under almost ended in a blaze of glory for the Groupama-FDJ cycling team. In the queen stage featuring two ascents of Willunga Hill, Bruno Armirail, member of the morning breakaway, was able to fight for the stage victory until the very last moment. He came up short barely in the last hundred meters at the top of the most iconic Australian climb. But thanks to his great 4th place on the line, the team completed the first WorldTour race of the season on a high.

It all started in a very lively way from McLaren Vale today. Daryl Impey’s teammates found themselves a bit overwhelmed when a large group of 26 riders, including Bruno Armirail, King of the Mountains’ Joey Rosskopf (CCC), Marco Marcato (UAE Team Emirates) and others broke away after 10 kilometers. “It wasn’t properly panic but it was still very disorganized in the bunch,” recalls Jussi Veikkanen. “Mitchelton-Scott played cat and mouse, tried to gamble and did not pull at all. It enabled the breakaway, where everyone was doing his part, to quickly gain a five minutes gap. Trek-Segafredo and AG2R-La Mondiale then started to chase but there were still a three minutes gap at the bottom of the first ascent to Willunga Hill.”

A new race then started for Bruno and his breakaway colleagues, as they had to start pushing a bit more to keep hoping for the win. “As I told the guys at the briefing, the breakaway never made it on that stage, so we were unsure of what could happen,” added Jussi. “Bruno tried to save as much energy as possible. Willunga Hills’ first ascent split the breakaway in two but there was also some damage in the peloton. So Bruno’s group managed to get to the bottom of Willunga’s final ascent with a minute gap. Bruno did a very good climb and was only caught with 600-700 meters to go by Porte, who was very strong and ruled the race.”

A six-time winner atop this very climb in the past, the Aussie set a new climb record on Sunday. He was also the only rider from the peloton to get back to the breakaway, but was outsprinted by Matthew Holmes (Lotto-Soudal) for the win. Bruno Armirail finished just seven seconds later, in fourth. “It’s a nice bonus for Bruno,” added Jussi. “He always gives his all to the team. So I really wanted him to have his own success, especially after having committed as he did by spending several weeks here in order to get ready for the new season. We wished he could have taken the victory but the level is pretty high here! It was a good performance from him and that shows that he is in good shape, it is all very positive.”

“We must continue to show this hunger”, Jussi Veikkanen

As for Kilian Frankiny, he kept his spot in the top-20 of the general classification despite a climb that did not suit him and he now looks forward to the “bigger, higher mountains”. The Tour Down Under therefore concluded with some positive signs for the team. “Overall, I am satisfied with how the guys rode”, said Jussi. “They worked well together and some good work was done. We just missed a bit of luck but we must keep showing this hunger and I hope it work out better for us next week. We will see how the shape of guys will be after 2-3 calmer days. We will also do a recon of the Race Torquay, as we don’t know it. Marc is already focused on next week. ”

Next appointments will then be on Thursday for the Race Torquay, new event on the calendar, and on Saturday for the second WorldTour race of the season, the Cadel Evans Great Ocean Road Race.