Thanks to Attila Valter, the Groupama-FDJ cycling team made itself noticed on stage 4 of the Tour de Pologne on Thursday. Towards the hilltop finish of Bukovina Resort, the young Hungarian slipped into the day’s breakaway and was also the last man to be brought back by the bunch, with seven kilometres to go. In the final, Romain Seigle and Jake Stewart managed to hold onto the right group, but could not fight for victory.

As they were a bit frustrated for having missed the big breakaway on Wednesday, the Groupama-FDJ’s riders were quite active on Thursday at the start of Tarnów. “We had named a few riders to go up front today, including Attila, Clément and Antoine,” explained Frédéric Guesdon. “Considering today’s final, we didn’t necessarily need everyone to help Jake. This is the reason why we gave carte blanche to some”. Attila Valter was in the front line when the stage officially started, but Clément Davy was the one to open the first gap with Jonas Rickaert (Alpecin-Fenix) before being brought back by the bunch. The right breakaway eventually went after ten kilometers or so, and the pink jersey wearer was well in there. “I was a little disappointed after the second stage,” he explained. “I had not too bad legs there, but I might have put too much pressure on myself. I had also not raced against such a field for a long time and didn’t feel comfortable all day. It was just better to forget about this day, so I was racing with no pressure today and I was happy to take my chance on the breakaway. I attacked alone, and waited for a big group to join me. Unfortunately, only four riders came across and one of them sat down after the intermediate sprint as he was too close on GC. We were down to four and I knew it was going to be hard, but that’s also why I took the breakaway: to put some work in my legs.”

“I’m glad I gave it a shot”, Attila Valter

Along with Larry Warbasse (AG2R-Citroën), Marco Canola (Gazprom-Rusvelo) and Edward Theuns (Trek-Segafredo), the 23-year-old never enjoyed a lead bigger than four minutes. “The cooperation was good between us four, we worked the same way, but when the peloton started to get closer, I think the others lost hope a little,” he said. “I wanted to arrive with a minute-gap at the bottom of the last climb, and I would have had a chance to surprise the peloton”. In the penultimate climb, Attila certainly showed he was the strongest in the front. However, that was not enough to hold the peloton back, and he was caught seven kilometres from the line. “I tried, I felt I had the best legs in the breakaway, and I’m happy I gave it a go,” he said. “But the peloton was coming fast. Also, the last four kilometers weren’t as hard as I thought and the bunch was rolling really fast. It’s likely that one minute-gap wouldn’t have been enough there. I’m just happy the legs were working really well. It was a good day for me, and I hope for the team as well. I’m still looking for opportunities, maybe tomorrow or even the last day, to get into the breakaways and put the miles in the legs. I also want to do a good time trial”. “Attila wanted to show that he had the means to do something on this kind of course,” added Frédéric. “It would have been difficult to fight with the stronger guys in the final, especially in the sprint. So he preferred to take the lead and it could have worked. He had to try, and he did.”

In the last three kilometers, the peloton lost some more riders due to the high tempo, but Romain Seigle and Jake Stewart were still there among some thirty men under the flamme rouge. However, the young Briton did not have enough left to compete for the victory, eventually ending up 25th next to his French teammate. “This was probably a too long effort, Jake was at the limit,” explained Frédéric Guesdon. “But he tried to hold on and that’s a good sign for the future. He’s still discovering a bit, he has to test himself in various situations and push as hard as possible to see what his limits are. He will then be able to define his priorities and goals. Still, he showed that he is capable of making it through this kind of final. He’ll keep improving, and in a few years I think he’ll be able to go for the win in this type of finish.” The Omloop Het Nieuwsblad’s runner up also seems ready to fight in Bielsko-Biala on Friday. “The finish suits him perfectly and we are going to race for him,” concluded Frédéric. “If we could get a small result at the end, that would be perfect, because we still race to get results!” 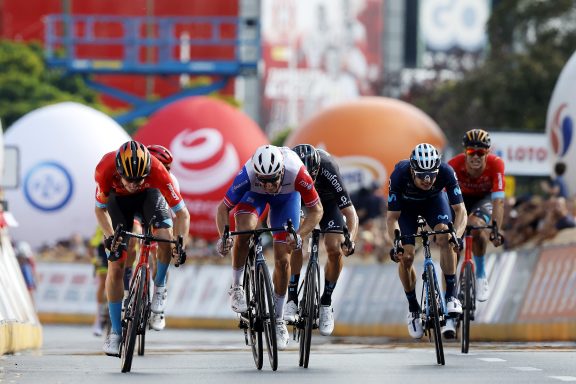