The 2021 Giro d’Italia is slowly coming to an end, but before the last big mountain stage tomorrow, an unprecedented summit finish in Alpe di Mera was on the menu this Friday. Thanks to rather good feelings, Attila Valter managed to limit his losses in this final climb alongside Matteo Badilatti (16th and 17th on the day), which also enabled him to gain one place in the general classification. With two stages left to ride, the young Hungarian sits in 14th.

The stages’ starts really look alike these days on the Giro. As expected, the fight for the breakaway was intense yet again on Friday in what was a much shorter course (166 kilometers) than yesterday starting from Abbiategrasso. This time, the finish was at the top of a long climb, but that did not prevent many riders from trying to take the lead in the first kilometers. Attila Valter and Rudy Molard actually joined a nice group of around twenty men after a few minutes. “I tried to go for the break in the first part of the race,” said the Hungarian. “It was a big fight, but in the end it was not so bad not being in front as some teams controlled very hard”. After about forty kilometres, a six-man group managed to get away, the peloton almost immediately let it go, but BikeExchange immediately came to set the tempo. “When the breakaway went, I asked the guys not to insist and not to get involved in the fight, because it was obvious that the favourites wanted to compete for the win”, added Philippe Mauduit. “If the break with Rudy and Attila would have gone, it might have been interesting, but at that point there was no other interest but to waste energy. It was okay not to have a rider in front today.”

Unlike the previous days, the breakaway did not get a large gap in this stage 19. The bunch also proved to be particularly tense, especially at the top of the first climb of the day, eighty kilometres from the line. Deceuninck-Quick Step stretched the peloton and momentarily left the pink jersey’s lieutenant Dani Martinez behind. “We made a little mistake”, confessed Attila. “We were behind and the bunch was split on this technical downhill. We wasted a bit of energy to get back in the first bunch”. Everything then got back together before the bunch would lose some riders in the Passo della Colma. In the lead, the breakaway tried to survive but only had a 20-second gap approaching the final climb of Alpe di Mera (9.6 km at 9%). “The guys worked well until the bottom of the climb,” explained Philippe. “At that point, there were about fifty guys left in the bunch and we still had Rudy, Lars and Matteo with Attila. It was pretty good.” From then on, the riders started to be dropped from the back and the Hungarian rider was distanced with about seven kilometres to the top. “I felt quite good in the end,” Attila said. “There was Rudy and Matteo with me at the start of the climb, then Matteo helped me really well until the finish. We were taking turns, I think we were pacing well and I managed not to lose too much.”

They eventually finished together, in 16th and 17th places, 3’30 behind the winner Simon Yates. “They fought well today,” added Philippe. “It’s a nice comeback after what happened two days ago,” said Attila. “It’s also nice because I’m gaining one place in the general classification”. Now 14th, the 22-year-old will still have to fight hard tomorrow on the last mountain stage towards Valle Spluga-Alpe Motta, throughout three first-category climbs. “It can be even better for us,” he said. “With longer climbs and riders dropping earlier, it’s easier to move in the peloton and it can be another good day for us”. “Deceuninck-Quick Step and BikeExchange will decide the race’s outcome,” added Philippe. “Depending on what they do at the start, we will quickly understand. Of course, it will be worth trying to get into the breakaway first, but everything will depend on who’s there, as always. It may not be necessary to get in front at all costs”. 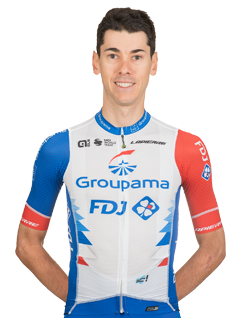