And one more that makes it three. In just a two-week time, Valentin Madouas has scored more victories than in his first four professional years combined. Taking advantage of his incredible shape, the Frenchman conquered the fifth and final stage of the Tour Luxembourg on Saturday, in the country’s capital. Following a big effort in the last climb of the stage, the 26-year-old puncher still had enough energy left to outsprint a four-man group that also included Kevin Geniets (4th). It was not enough to also take the overall win, but he still climbed to third place while his Luxembourg teammate finished fifth. A superb week, from start to finish, and a seventeenth victory for Groupama-FDJ in 2022.

“It only came down to the final climb”, Frédéric Guesdon

After a small loop of five days in the Grand Duchy, the riders were set to return to Luxembourg City on Saturday for the event’s conclusion. Groupama-FDJ knew this final particularly well as David Gaudu took victory in the same place in 2021. Still in the mix for the GC victory before this last stage, Frédéric Guesdon and Jussi Veikkanen’s men still took the start from Mersch with a conservative approach. “We didn’t really want to go in the breakaway,” explained the French sporting director. “We wanted to save our strength for the final. A four-rider move came out quite quickly, with one man that was two minutes away overall. We knew that the leader’s team was not going to leave them too much room. It wasn’t bad news for us as it could tire them a little, and that’s what we wanted in order to provoke a lively race.” At the head of the race, Felix Gall (AG2R-Citroën), Sander Armée (Cofidis), Pierre Rolland (B&B Hotels-JTM) and Joel Nicolau (Caja Rural-Seguros RGA) led the way but never enjoyed a significant gap. Entering the last fifty kilometres, their advantage was barely two minutes. Moreover, the peloton did not ease off in the back as they approached the final circuit and the last, hilly, quarter of the race. “Once the breakaway was gone, we rode together, we waited, and just before getting to the first lap of the circuit, we sent Lars up front”, said Frédéric. “Unfortunately, he found himself on his own and it was not ideal. We wanted to make the race hard entering the circuit, but nobody came along”.

Lars van den Berg therefore stayed about fifteen seconds in front of the peloton for a few kilometres before getting back alongside his teammates and setting a solid tempo. However, the selection did not prove very large on the small circuit around Luxembourg. “Eventually, the race broke down just in the end and it only came down to the final climb,” said Frédéric. “We might have been able to take advantage of our two different cards if the race would have been harder, but that was not the case”. “The guys were great, and we did a strong race as a team”, claimedValentin. “We wanted to make the final hard, but the circuit was not difficult enough and there especially was a headwind on the second climb which kind of blocked the race. We therefore preferred to wait and go for the stage win, hoping to make a gap on the last climb as well”. “We could just hope that the leader would crack”, added Frédéric. “In any case, it was important that Valentin and Kevin were in a good position at the bottom. We really had to be up there from the bottom of the climb and go all in. We knew that they would not get dropped on such a climb given their current shape”. About sixty men approached the Pabeierbierg (700 m at 9%), and Valentin Madouas produced his attack after a few seconds. The Frenchman made a long acceleration, and only three men could follow: his teammate Kevin Geniets, Kevin Vauquelin and the yellow jersey Mattias Skjelmose. At the top, the quartet was able to make a gap to the rest of the competition, and the Breton kept the lead until the last corner. “I then left a small gap on the yellow jersey, 300 metres from the line, in order not to be directly in his wheel considering the headwind”, commented Valentin. “I came with a bit of speed, which allowed me to overtake him, and with the headwind, we then all stayed in our place”.

“I was missing a victory, so to take three in a row is great!”, Valentin Madouas

Full of confidence and strength, Valentin Madouas won this last stage in a sprint, after having won solo in the opening one. On the line, “it came down to half-a-bike length”, he added. “It’s a very close victory, but it’s always nice to win, especially in a reduced sprint”. “The finish line was also slightly uphill”, explained Frédéric. “Considering their speed on the climb, the strongest was set to win. Kevin was in a great position, he thought he could move up with the headwind, but his legs told him no. On the other hand, Valentin’s legs did not weaken. It comes down to detail, but I really think the strongest won today”. In the same place where his friend David Gaudu won in 2021, Valentin Madouas took his third win of the season and moved up to third place overall. “All the riders in the team did a great job in their own way, we went all in with Kevin, and it worked out”, he said. “That’s awesome. I was missing a victory, so to take three in a row is great!” Fourth on today’s stage, the “local” Kevin Geniets also secured his fifth position in the general standings. “We can’t complain with two victories as well as a podium and a fifth place on GC”, added Frédéric. “We would have liked to win the overall too, because we are greedy, but it’s still a good week. Valentin and Kevin have surely gained confidence prior to the World Championships, but so have the others. Lars, who is coming back from a difficult year, finished this Tour of Luxembourg very well. The young Lorenzo also had a very good Tour, Clément did a good job, just like Tobias, even if he struggled a bit more today. This group will be motivated for the rest of the season”.

Like Kevin Geniets, Valentin Madouas will now fly to Australia. “I’ve got good momentum,” he concluded. “We will see what the tactics will be, what my role will be, but we will give everything to get a third consecutive jersey for the French team. Personally, I feel really good, and I hope to be able to be there in the final of the race”. 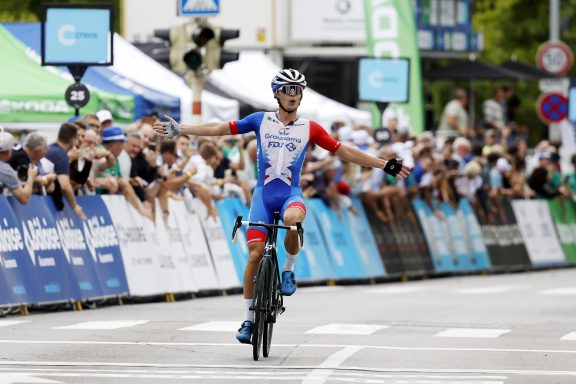 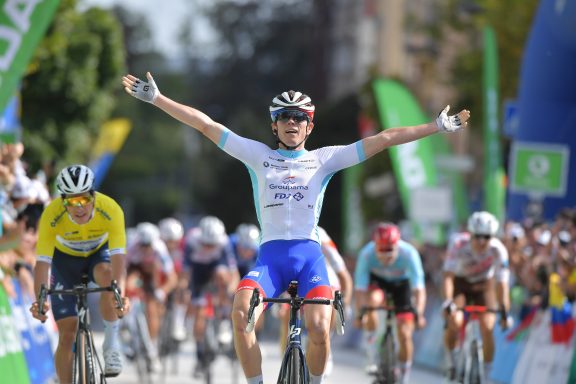