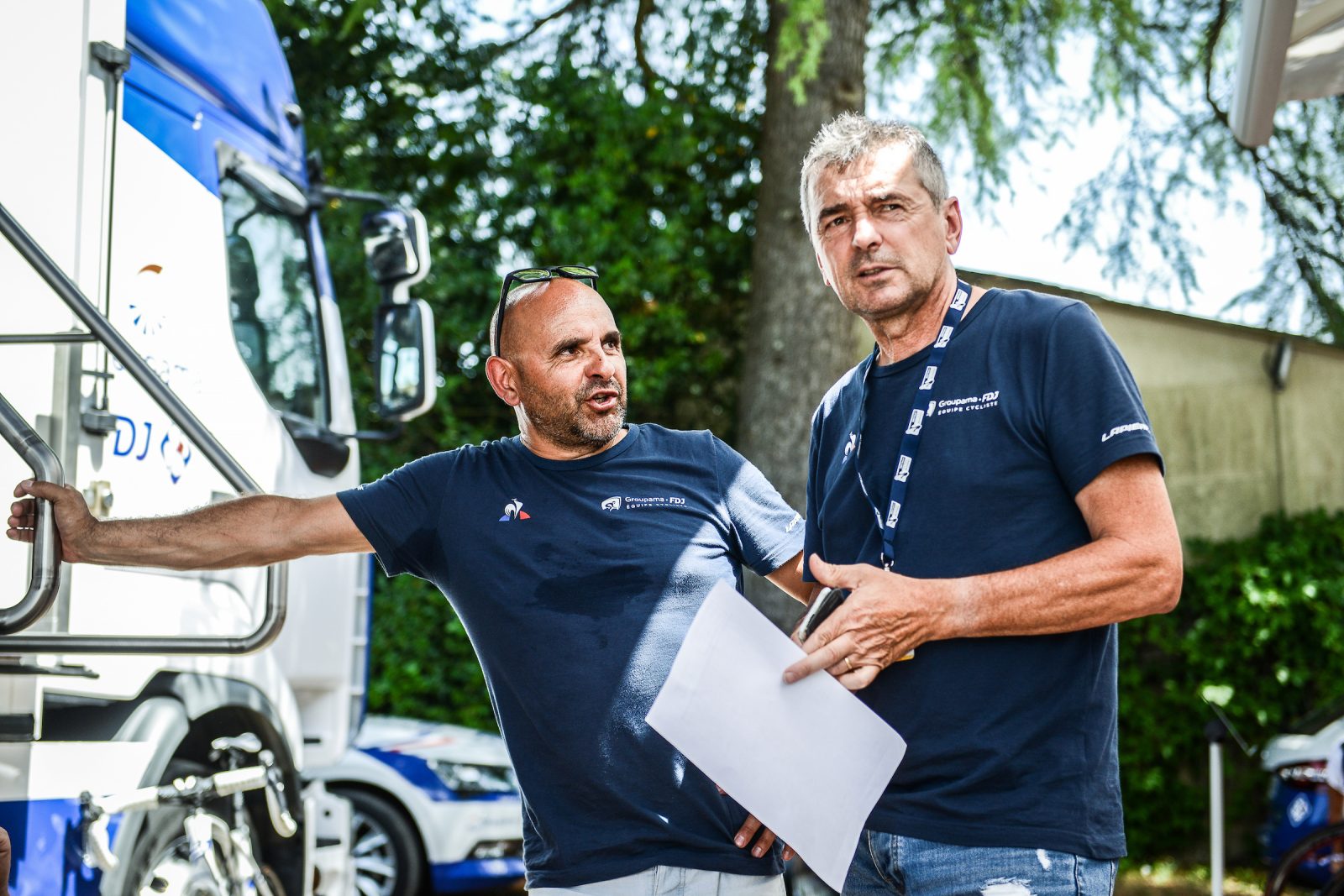 Like many other working fields, the world of cycling is now on standby. In order to slow the spread of the virus, many countries are now calling for near-total containment, while cancellations of cycling events, as big as they may be, keep being announced. Like the whole peloton, the riders of the Groupama-FDJ cycling team find themselves in an unprecedented situation that naturally requires very specific support, which Yvon Madiot presents to us.

Before talking about the current situation, can you describe to us the relationship between sports directors and riders in “normal” circumstances?

Usually, we have three groups, with two appointed sports directors per group. Each one has a “specialty”. Philippe Mauduit and I are more focused on climbers, Fred Guesdon and Jussi Veikkanen on sprinters and Classics riders while Thierry Bricaud and Franck Pineau take care of the youngsters. Generally speaking, a rider will therefore have two main contacts in the sporting management. This enables him to always have someone to refer to if one of the two “DS” is busy in races. Usually, there is a constant contact to ensure the good health of the rider, before and after competition, but also to check his motivation. There are also talks about races programs, and it is up to the appointed sports director to tell the rider if he’s selected or not for the races. This can also lead to speak about the strategy that will be implemented in competition. Finally, they can share information and there obviously is a proper human contact, allowing the rider to speak about how he feels, mentally and physically. Aside from that, he’s in touch with the coach, but the latter is more focused on the sports side.

Each one knows his job. The coach is really focused on preparation and training, even if the human side can also come into play since he is in very regular contact with the runner. Anyway, the trust is absolute between the performance and sports direction departments. We call each other very often and we have a group to chat on. At the slightest alert, uncertainty or information, we communicate on this platform and it works perfectly.

Let’s get back to the DS-rider relationship. Is it even more important with the coming period?

Our job, whether we are a sports director or a coach, will be very important in the coming weeks, as we have no idea on what’s coming. A rider is a competitor, he is a sportsman, he is a racer and he needs to release his energy. So, the most complicated thing will be to manage his inactivity. We will have to bring them serenity, information, but we’ll also have to reassure them. The guideline must be clear to everyone. Depending on the news we’ll get in the coming days, here and there, we will be able to communicate even more with the riders. We also need to prepare for an extended stand-by, possibly until early June. But in order to reassure, we also need to show that we are ourselves completely calm and that there is no panic whatsoever. That being said, first and foremost, there are procedure and instructions to follow, and everyone definitely gets along with it.

In the current situation, there are different cases indeed. It may be easier for those who did quite a complete start of the season and rode until Paris-Nice. They now take a break which is more or less logical, even if it was rather planned after the Tour of Catalonia. On the other hand, there are the young riders, who could be a bit lost, and the riders whose contract is expiring. The rider is on fixed-term contract, and needless to say, we’ll need to offer them peace of mind. Some may think that time is flying and that the months of racing will pass very quickly. We will have a lot of work in order to provide comfort and explain the situation to the riders. Everyone is obviously aware of what is happening, and gets along with it, but they will have to be reminded that everything won’t stop because of the virus.

What will your support be like in these circumstances?

The primary goal will be to sweep away the concerns, if there are any, and emphasize that there is no choice but to accept this situation. There is nothing we can do about it. But once again, no one should come to the conclusion that this is the end of the world, not even the end of their career or the end of the team. They need to accommodate to this difficult time, and later, they will be able to start off again, which they will do without a problem, that’s for sure. We know how mentally strong an athlete usually is. We will make sure that each rider is fully informed and reassured with the situation. The team leaders’ situation is slightly different, but we are aware that it can be more disturbing for a young rider, a teammate, a rider who is coming to the end of his contract or a rider who has had a difficult start of the season. The focus will rather be on them. They will need to reassured and supported.

What are the specific concerns for a team leader?

They are not the same and his future is not in jeopardy. In the present case, the problem is that Arnaud almost did not ride at all. All of his preparation was done looking at the months of March and April… and he only raced five days. He showed great commitment and was only getting to his targeted period. Thibaut followed an almost normal schedule and it may be easier to accept for him. For riders like them, the main disappointment, or frustration, could be that they haven’t been able to fully take advantage of their form and their preparation to win races in the expected period. But as leaders, they have strong character. They know very well that they will be able to bounce back on other objectives. Thibaut is aware that he will have some big goals this summer, and Arnaud also knows very well that, even without the Giro, the second part of the season will still be important for him. By nature, and thanks to their status and state of mind, leaders know how to remain mentally involved. We will make sure of it, but Arnaud and Thibaut, like others, know very well that when competition will resume, they will always have this physical advantage over others. At some point, their qualities and talent will speak for themselves.

“We will advise the riders to stop training”

Ensuring that equity will be more or less preserved, is it also a way to bring peace to the riders?

Absolutely. We must reassure them by reminding them that everyone, or almost everyone, is on the same boat, and therefore they will not be penalized. At the end of the day, whether you are French or foreign, everyone has a family they want to take care of. On top of that, travelling isn’t going to be easy. The borders are closed. A rider who tries to leave for a training camp far away from home could even find himself confined on the spot… Many things will come into play, but yes, we can say that everyone is pretty much on the same boat in the current circumstances. So you have to stop for a moment, understand the context, analyse, then, when the time comes, we will go back to more concrete things in terms of work. Because today, we can certainly train indoors, but deep down, why do it? It’s a very difficult situation for a rider to train without perspective, and I personally don’t think it’s the right way to prepare for the future

What will be the instructions to the riders for the coming days?

For now, we are going to advise them, after consulting with the coaches, to stop training, even on the home trainer. The team’s watchword is to stay home, rest, take care of your family, and by doing so helping to fight the virus. We recommend this break and above all we hope, by then, to have an improvement of the overall health situation, and why not first news, dates. The most important thing at the moment is to stop. Then, if government directives allow us, we will resume outdoor preparation with objectives. They won’t be competition goals at first, but rather physical condition ones, like in December more or less. If there is, for example, a potential resumption in June, it will then be up to us to prepare something more structured, together with the coaches.