And it’s on for another year! Until next summer, Stefan Küng will keep wearing his star-studded jersey as a European champion in the time trial. Against a very strong field on Thursday, the Swiss rider conquered a brilliant victory after 22.4 kilometers around Trento, Italy. Beating the world champion Filippo Ganna and Remco Evenepoel in particular, Stefan Küng is now heading towards a bigger goal.

There were thirty-nine riders at the start of the 2021 edition of the European Time Trial Championship on Thursday. Among them, however, only a handful had a real shot at claiming the crown in the circuit of Trento. “It was a very fast time trial,” said Julien Pinot, the reigning champion’s coach. “The whole 22 kilometres were really flat”. Before the Swiss man set off to defend his title, at exactly 4:38 p.m., another member of Groupama-FDJ showed up at the launch pad: naming Bruno Armirail. Starting at 4:11 p.m., the silver medallist at the French championship finished twenty-six minutes and four seconds later, at an average speed of 51.5 km/h. At this point Stefan Bissegger held the best time in 24’52. The fight for gold, however, took place amongst the very last starters. Filippo Ganna therefore set the best provisional time in the intermediate checkpoint, one second ahead of Remco Evenepoel while Stefan Küng was three seconds late at that point. “He knew very well what he had to do,” added Julien. “Given that there was almost no wind and the course was very flat, he ‘just’ had to maintain a specific zone effort. There were small parts of the route in town but it wasn’t super technical. The roundabouts were easy enough to approach. It was a real time trial. It was all about the power and aerodynamics. In terms of equipment, everything was 300% ready and he also perfectly managed his effort. He really had great legs. He was three seconds back at the intermediate point but he did not lose his momentum at all on the way back, while the others did just a little.”

“It was a very fast course, and even though there was a slight tailwind in the second part, I think it was very important to keep some power for the turns and the small bridges in the final, in order to always maintain the speed”, Stefan said. “I had a plan and I executed it perfectly. I knew it was going to be close and that I had to be aggressive after the corners, pay attention to all the details. When I passed with a three second-delay in the intermediate, I thought it was looking good because I knew I could finish even stronger. Also, given that I lost the medal by a very small margin in Tokyo, I knew it could be close and that I absolutely had to give everything for it not to happen again. I just thought about pushing, pushing and pushing”. At the finish, however, the margin was not so small. As the last competitor on the route, the Swiss rider perfectly handled the last few corners and got to the home stretch. He then erased Ganna’s mark by seven seconds, for an average speed close to 55 km/h! “He gained ten seconds on Ganna after the intermediate checkpoint, he was very very strong on the way back”, said Julien. With style, and against an even better competition than in 2020, Stefan Küng therefore got his second consecutive European title. “It’s amazing to be able to defend this jersey because almost all the specialists were here,” added Stefan. “I’ve been close a few times, and I’ve always said I just had to beat them all in the same day. It was so today and it’s really nice to keep this jersey”. “Beating Ganna, at home, on a very flat and not too long course, is a real benchmark performance,” added Julien.

“My big goal is to put another jersey”, Stefan Küng

This major success also comes after several great but frustrating performances in recent months, particularly in the Tour de France (2nd and 4th) and the Rio Olympics (4th). “Stefan is a perfectionist, he seeks both perfection in effort and in result,” said Julien Pinot. “Only the victory matters to him. However, the level is super high and homogeneous between a few riders. There is not a single hierarchy. This is the reason why we take each time trial as an event in itself. Today, he got successful and it is well deserved considering how much he is committed to the discipline. For him, each time trial is an objective and he tries to do everything 300%. It’s important to get a satisfaction like this one in order to reward all his hard work, that of the team, the mechanics, Jürgen, the performance department”. “When all the work we do with the team pays off, it’s really nice, because that’s why we do it,” Stefan said. “It’s wonderful to be rewarded with such a victory and it gives me the motivation to keep giving everything until the Worlds”. Barely had he crossed the line that the Swiss man indeed already had his eyes turned towards his next goal. “I’m really proud to keep this jersey, but my big goal is to put on another one on September 19 in Brugge,” he said. “This is the goal I have in mind since Tokyo”.“It will come fast,” Julien concluded. “His shape is increasing. This will give him confidence to spend these ten days in a good way, without resting on his laurels though, because it will be a whole different race. It will be longer (43 kilometers) but again very flat. We will have to switch to a longer effort, which does not necessarily disadvantage him c 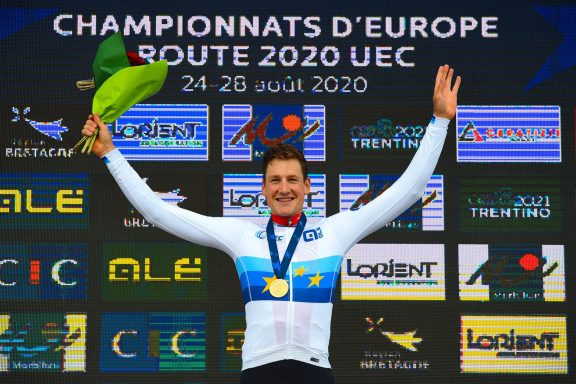