Despite a punchy final in the second stage of the Tour de Suisse, Stefan Küng held on tight to keep the yellow jersey he got on Sunday in the opening time trial. After a good teamwork throughout the day, the Swiss rider fought hard in the last climb and in the run-in to the finish to keep the overall lead for just one second. Tomorrow, he will defend once again defend his jersey the best he can towards Pfaffnau.

“Every two kilometers I saw someone I knew”, Stefan Küng

The mission was hard, but it was worth the effort. Almost literally at home on Monday, Stefan Küng showed up at the start with the yellow jersey on his shoulders, and he had no intention of giving it away without a fight. “We wanted to try to keep the jersey, not only because it’s important for Stefan, but also because it’s a WorldTour event,” explained Franck Pineau. “We had to defend it, even though we knew it was going to be hard in the final with a very hilly course, the rain and a very high competition. We put two guys to pull, namely Alexys [Brunel] and Fabian [Lienhard], and they always kept the gap under six minutes.” The day’s breakaway, formed after about ten kilometers, just included four men: Tom Bohli (Cofidis), Matteo Dal-Cin, Nickolas Zukowsky (Rally Cycling), Claudio Imhof (Switzerland). Although the terrain was not completely flat over the first hundred kilometers, the pace was still quite moderate, which allowed Stefan Küng to fully enjoy his jersey. “It was amazing today at home, on my training roads,” he said. “I had many friends and family on the side of the road. Every two kilometers, I saw someone I knew. It’s the best feeling you can have. The first part of the stage really was in my area. The race was calmer at this point so I had enough time to look at who was there. I couldn’t afford it in the final, where it was full gas!”.

About 70 kilometers from the finish line, Mathieu van der Poel’s Alpecin-Fenix ​​came to pull alongside Groupama-FDJ at the front of the peloton, and the gap with the breakaway gradually reduced. So much so that it was only of two minutes after the first 2nd-category climbs, in Ghöch and Oberricken. Due to the strong showers on the downhill from Oberricken, the peloton then split into several pieces but the yellow jersey never was in trouble. “Stefan never moved from the top fifteen places all day, so he’s definitely more likely to be in the right move when breaks occur,” Franck said. It was therefore a bunch of around 60 riders, including Stefan Küng and Jake Stewart, that headed for the final. The last man standing from the breakaway, Claudio Imhof, was caught in the very first slopes of the last climb, located ten kilometers from the line. Brought back in front by Jake Stewart at the bottom, Stefan Küng then did his best on the 2400 meters of climbing (8,3% of average slope) to stay close to the best punchers. The Swiss champion managed to reach the summit only fifteen seconds behind Alaphilippe, Van der Poel, Carapaz, Woods or Schachmann. The race did not ease off on the downhill or in the flat section leading to the line, so Stefan Küng had to chase hard to the end to limit his losses. As Van der Poel claimed victory, the yellow jersey crossed the line in 26th position, 22 seconds later.

“Tomorrow, we can have two goals”, Franck Pineau

“We knew it was tight for the yellow jersey,” said Franck. “According to our calculations, we thought we would keep it, but we had to wait for the official results. With the rain at the finish, Stefan preferred to go to the bus, even if it meant coming back for the podium”. After a few moments, the GC was made official and the yellow jersey indeed stayed on King Küng’s shoulders, for just a second on Schachmann, and two on Alaphilippe. “Stefan was convinced he could get through the climb today, but it really wasn’t easy,” added Franck. “He really gave his all, and he made it for one second! This is the main thing and the goal has been completed”. “I was feeling good today,” said the Swiss man. “I had said that it would all depend on how my competitors would go up the climb. They went hard, but I gave everything I had and I tried to close the gap as much as possible on the flat. I was lucky to close the gap enough and I’m happy to keep the jersey one more day. I need to thank the team for the awesome job today. Now we’ll keep on going! One-second lead is not a lot but I will do my best to keep it tomorrow. It should be easier. The last climb is not as hard as the one of today. I expect a sprint from a small bunch”. “Tomorrow, we can keep the jersey and do the sprint with Jake”, concluded Franck. “The guys have the right mindset and we can have two goals”. 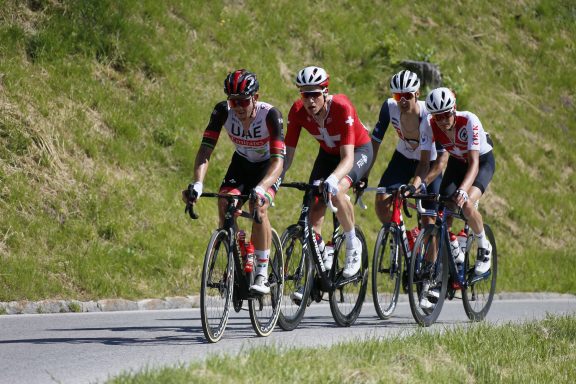 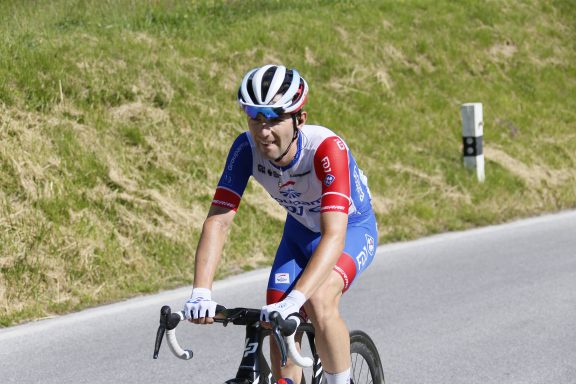 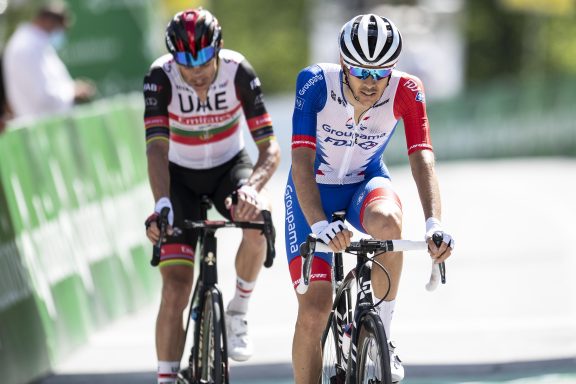