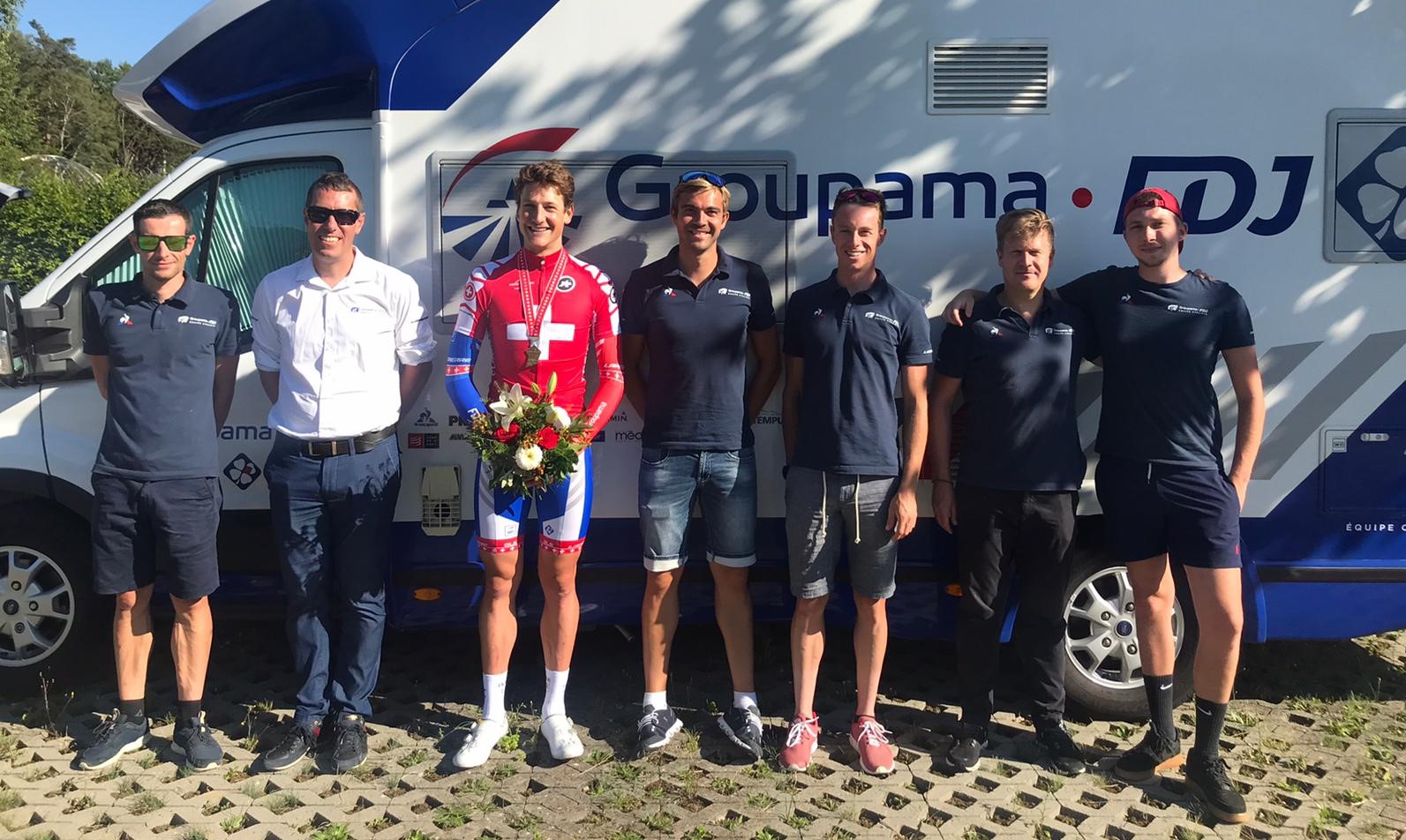 This Sunday proved to be a great day for the whole Groupama-FDJ cycling team at the Swiss time trial championships. Both Stefan Küng and Alexandre Balmer, who respectively participated in the Elites and U23 races, took the national title at Belp. Thanks to these two wins, the WorldTeam AND the “Conti” have now perfectly launched the second act of the 2020 season.

And that makes it 4 for Stefan Küng! After 2017, 2018 and 2019, our time trial specialist added a fourth national title to his – elite- record. Almost four months after his last day of racing, in Paris-Nice, the former individual pursuit world champion made it clear he did not want to return his crown. He therefore proved to be unstoppable on the course designed just nearby the Bern airport. After three laps of a ten-kilometre circuit, he beat runner-up, Silvan Dillier (AG2R-La Mondiale), by a consequent margin of 54 seconds.

“It was the first time I was at the start of a race in four months. It was something special, but it’s nice to put on a bib and find back the racing sensations”, Stefan explained afterwards. “Moreover, it went well. My mission was to defend the jersey and that’s what I did. It’s nice to be able to wear it for another year on international races. I did a recon of the course several times and I knew what I had to do. I had a plan in my mind and I was able to execute it 100%. It’s also nice to get this first win with my new bike.”

Due to the coronavirus crisis, his approach to the event obviously changed from the usual. “Normally, the Championships are just before the Tour so we don’t prepare for it in the same way. I’m coming back from an altitude training camp and I did not necessarily prepared specifically for this event. I did a lot of time trial lately but they were included in my schedule anyway. I had not made any intense efforts until now and I felt it today. It was a course with a lot of corners, it was tough to accelerate every time, but it was good to find back these racing sensations. In training, you always have a margin, you adjust the pace, and you can choose a course with fewer turns. In any case, it felt good to race again”.

Earlier in the afternoon, his young fellow-countryman Alexandre Balmer, a Conti rider since this year, took the start of the Swiss Time Trial Championship in the U23 category. Fifth in 2019 during his first season in these ranks, the young rider from La Chaux-de-Fonds was the fastest this time, on the twenty kilometers course (2×10 kilometers) around Bern Airport. However, it was a close call for him to bring the very first win of the year for the Conti. It came down to one second (!) to Joel Suter, also a professional rider at Bingo-Wallonie Bruxelles.

“Luckily, the one-second advantage is in my favour”, Alexandre Balmer

“I prepared really well for this time trial and I was in a really great shape,” claimed Balmer a few minutes after the medal ceremony. “You had to be focused all the way, but I never was in trouble. It was a very technical course where you had to be cautious with your trajectories, especially before the corners. I was often at the limit and I scared myself a bit at the start. I hit traffic cones with my leg and I thought, “you need to calm down now.” I also lost the radio during the race and I thought I had a better lead so I was taking less risk in the corners afterwards. In the end, the gap was of only one second, but luckily it’s in my favour. I’m happy because it hasn’t been an easy week for me. I have travelled a lot. In any case, we are starting the second half of the season with the team in the best possible way. I hope it will go on like this but we are going to take the races one after the other”.

Even though he is quite a versatile rider, Alexandre Balmer is particularly interested in the time trial. Still his practice was put on hold for a while: “Normally, I was supposed to work on the time trial since March,” he added. “But with the lockdown, we all returned home leaving our time trial bikes at the race service. We learned of these championships just three weeks ago, at the last minute kind of. I then quickly went to get my bike in Besançon and I tried to work this discipline as much as I could because the effort is completely different from that of mountain biking for example. With my trainer Joseph [Berlin-Sémon], we tried to make the most of the time we had left. I’m really glad it went well, and now we’re going to try to prepare for the European and World time trial championships because it’s something that suits me quite well. I love pain and I don’t need others to go beyond my limits”.

At barely 20 years of age, Balmer actually took his sixth national title: the fifth on the road, the third on the time trial (after those won in the U17 and U19 ranks). Therefore, he only misses the Elites titles. Watch out, Stefan…