In the first mountain stage of the Volta a Catalunya, finishing at the top of La Molina, Ben O’Connor took the win on Wednesday. A small bunch of favourites got to the line a few seconds behind the Australian, and Sébastien Reichenbach (26th) was among them. The Swiss man and his fellow climbers will have another opportunity tomorrow on stage four, which will offer three first-category climbs towards Boí Taüll.

After two first hectic days, especially due to the wind, the Volta a Catalunya came back on a more traditional pattern on Wednesday in the first mountain stage towards La Molina. Before tackling a series of climbs and downhills, the day started with a long, slightly uphill road of fifty kilometres. “There were two possible scenarios this morning”, explained Philippe Mauduit. “The first one was that, after a big fight, a nice group would go away and fight for the stage win. The other one was the fight would not be so intense and only 3-4 riders would go, in which case the break had very little chance of making it”. The bunch eventually chose the second solution after about twenty minutes of racing. Simone Petilli (Intermarché-Wanty Gobert), Casper Pedersen (DSM), Ander Okamika (Burgos-BH) and Mikel Bizkarra (Euskaltel-Euskadi) then took the lead, and although the bunch let the gap reach eight minutes, the pace became more serious from the climb of Mont-Louis. About fifty kilometres further on, at the top of the second climb of the day, the Collada de Toses, the Groupama-FDJ tried to come back up before tackling the downhill towards the bottom of La Molina. At that point, the breakaway only had a minute’s lead and the fight among the GC contenders was indeed about to happen. “In this scenario, we had to take it easy in the bunch during the day, hang on in the final climb and wait for the leaders to be isolated to try to attack”, added Philippe.

“The day is neither good nor bad”, Philippe Mauduit

Due to a high tempo in the first kilometres of climbing, the peloton quickly reduced to about sixty riders, and Groupama-FDJ still had numbers. “Even if there weren’t many teammates left for the leaders and not a crazy tempo, it was still fast because of the many consecutive attacks”, explained Philippe Mauduit. “O’Connor attacked with eight kilometres to go, and that’s what we would have liked to do. Unfortunately, we were not able to do it today”. Then, the peloton did not manage to really get organized, and Bruno Armirail even took advantage of the pace dropping to counter-attack. “Bruno’s attack is like him: courageous. Whatever the conditions, he gives it a go”, said Philippe. “You can always hope that one or two riders will go with you and that it will calm down behind, but it never did. Everyone wanted to try and get back on the leading man and there were a lot of attacks, although it was a bit messy.” Eventually, Ben O’Connor was never seen again and crossed the line a handful of seconds ahead of the favourites. Sébastien Reichenbach reached the finish in twenty-sixth position, nine seconds behind, while Matteo Badilatti placed thirty-third at twenty-one seconds. “The day is neither good nor bad,” said Philippe. “Attila did not have the best feelings. Seb and Matteo tried to hold on and did what they could.”

In the general classification, Sébastien Reichenbach is now the highest ranked for the Groupama-FDJ (27th). Tomorrow, three climbs and more than 3,500 meters of elevation gain will be on the menu for the riders, with another summit finish after 13 kilometres averaging 6%. “There is a good chance that we have a similar stage as today, because the general classification is not done, and that could happen tomorrow”, said Philippe Mauduit. “I think the big guys will control the race, unless there is a big fight at the start and a 15-20 breakaway goes without anyone dangerous in there…” 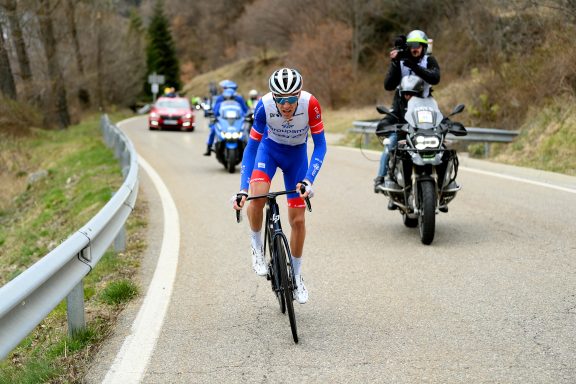