This Saturday, David Gaudu put an end to his 2021 season with another high level performance. From Como to Bergamo, the young Breton once again stood up to the world’s best rider to fight for the top position of the Tour of Lombardy. He finally grabbed seventh position on this fifth Monument of the year, in a group playing for 3rd, and also recorded his 29th top 10 of the season. Attila Valter also made a good impression with a twelfth place on the line.

For the first time since 2016, the Tour of Lombardy started from Como to reach Bergamo, and not the other way around. Therefore, for the first time since 2016, the course did not go through the Colma di Sormano and its terrible gradients. However, many climbs featured on the route, and although the two main ones were located in the last ninety kilometers, the iconic one of Madonna del Ghisallo was tackled after only thirty kilometres of racing. It actually is at that point that the day’s break was finally able to establish itself, thus enjoying first the bells’ sound at the summit. Mattia Bais (Androni-Sidermec), Jan Bakelants (Intermarché-Wanty Gobert), Victor Campenaerts (Qhubeka-NextHash), Thomas Champion (Cofidis), Andrea Garosio (Bardiani-CSF), Amanuel Ghebreigzabhier (Trek-Segafredo), Chris Hamilton (DSM), Domen Novak (Bahrain-Victorious), Davide Orrico (Vini Zabu) and Tim Wellens (Lotto-Soudal) got a six-minute lead at best, but the peloton started to gain back some time in the first real climb of the course, in Roncola Alta. However, it was only fifty kilometers later, starting the Dossena ascent (11 km at 6%) that the race really started. The first attacks quickly made a selection within the bunch, which only included 80-90 riders at the top of Zambla Alta, 75 kilometers from the finish. At that point, the Groupama-FDJ’s five climbers were still there.

“Always nice to finish on a good note”, David Gaudu

The peloton then split up momentarily on the downhill, but got back together again and caught the morning breakaways before facing the last big climb of the day: the Passo di Ganda (9.3 km at 7.1%). Due to a very high pace, many riders were dropped right from the bottom, but David Gaudu, Attila Valter and Thibaut Pinot managed to hang on in a thirty-man peloton. The favourites eventually started to get into action five kilometres from the top, first through Vincenzo Nibali, but more especially with Tadej Pogacar’s counter-attack that immediately created a gap. Slightly in the back, David Gaudu found himself with the other main leaders, but was already 30 seconds away from the Slovenian at the top. Despite the obvious pain, the young Frenchman held on throughout the whole climb, managed to follow Julian Alaphilippe’s attack, but unfortunately missed the good move at the start of the descent. “I have a small regret, because when Masnada goes, I react a second too late”, he said. “The door closes in front of me, I can’t go straight away, and when I go back for it, they come back to me. However, they don’t come back to Masnada who joins Pogacar. I do not know if we would have played victory between the three of us, but it still is my day’s small regret. I don’t really have any others”.

At the end of the downhill, Pogacar and Masnada therefore led the race while David found himself in chase with Roglic, Yates, Woods, Bardet, Alaphilippe, Vingegaard and Valverde. Although the cooperation proved good enough at first, it then fell apart in the second group entering the last 15 kilometres of racing. The leading duo was therefore able to increase its lead towards the final and the Colle Aperto (1.3 km at 7%), leaving its competitors with just a third place to fight for. In the last hill, the Groupama-FDJ climber brilliantly followed the final attacks, finding himself in a group of five to play the podium. In the lead, Pogacar outsprinted Masnada to conquer his second Monument of the season, while the Gaudu group got overtaken by Roglic and Yates coming fast back from behind in the last hundred metres. The Frenchman then had to settle for seventh place in the sprint. “A top 10 on a Monument, with such a field, is always good and promising,” said David. “It’s nice to end up on a high note here in Italy. We were up front in all the races of the week, and the group worked well all along. Even today, the team did a very good job, with Lada and Roupette, or even with Seb in the penultimate climb. My season’s balance is really positive, I have been there from Haut-Var up until here, in Lombardy”.

“I could have done even better”, Attila Valter

With this seventh place, David Gaudu scored his second top-10 on a Monument this season after his podium in Liège-Bastogne-Liège. In addition, Attila Valter put on his best performance on a Classic, moreover a WorldTour one, by taking twelfth on the day. “These last few races have been really hard. I’ve felt good on some and not so good on others, but I’ve always tried to do my best for the team,” said the 23-year-old from Hungary. “Today was no different. I finally had the legs I was looking for and tried to do the best for the team one last time. I remained calm the whole race and saved as much energy as possible to stay with David until the last moments. I think I could have done even better, in terms of the result and in terms of helping him, but I think we can be really happy with this week. Personally, I’m happy to finish the season with this nice race and I can’t wait to take a well-deserved holiday, before taking another step for next year”. It is with this satisfying team performance that the 2021 season came to an end for the “climbers’ group”. “David lived up to our expectations”, summarized Sébastien Joly. “The good news is that Thibaut also had better feelings today. There was a good team spirit around David. There are certainly still some things to improve for the future, but it was a good experience”. 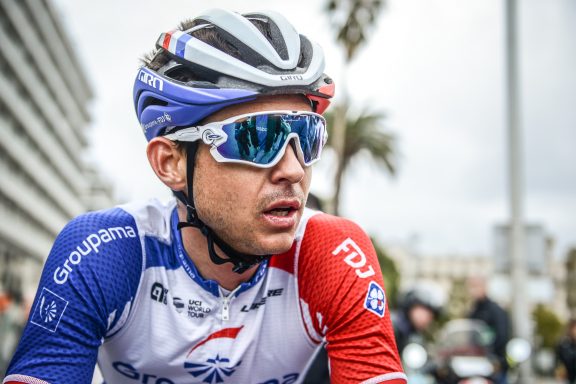