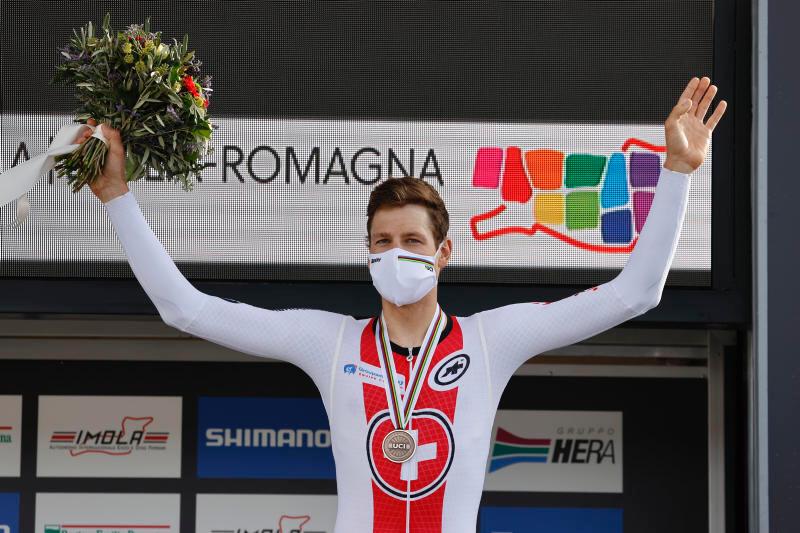 A year later, Stefan Küng is back on the podium of a road cycling world championship. However, in Imola on Friday, he collected the bronze medal in his favourite discipline, and not in the road race. After his European champion title in mid-August, the 26-year-old Swiss man continues to assert himself and to climb in the hierarchy of the world’s best time trialists. In Italy, he only got beaten by the local Filippo Ganna and the impressive Wout van Aert.

“The team showed him a lot of confidence”, Julien Pinot

Until last year, Stefan Küng had never entered in the top 10 of a world time trial championship despite undeniable qualities for the discipline. In Yorkshire, he barely took 10th, and although his Worlds ended in a brilliant way with the bronze medal in the road race, the young man from Switzerland was hoping for a lot more in his discipline of heart. “Since last year, we have stepped up the work on time trial even more,” his coach Julien Pinot recalled on Friday evening. “Throughout the year, during the lockdown and the period without races, we worked hard on the time trial intensities.” As soon as the season resumed at the end of July, Julien also noticed that a milestone had been passed by his protégé. It got proven soon enough as he first won his national championship, but above all the European time trial championship. Heading to the Tour de France, everything was right in order. The Tour did not obviously go as expected for the Groupama-FDJ cycling team, but Stefan Küng was able to show his good condition along the way regardless. With little to hope for in the final stages, the Swiss then decided, with the team’s approval, to leave the race four days from the end to prepare an appointment way more suited to him. “We made this decision with the team’s confidence,” said Julien. “This allowed him to be able to recover and to work again a little at the beginning of the week in order to be perfectly ready for this race. We are happy with the preparation that we were able to put in place and that the team supported us. They showed him a lot of confidence and I think he’s happy to answer it that way.”

“A reward for all the work done”, Stefan Küng

Of course, Stefan Küng would have preferred to do these 2020 Worlds at home, as was initially planned. However, the Swiss man was just as excited about the 31.7 kilometre that made the Imola circuit. “It was quite flat for 3/4 of the way, with just 2-3 small climbs at the end,” explained Julien. “But what made the course really difficult was actually the wind. There were really big gusts. The whole first half was with the headwind, and the whole second part with a tailwind. Therefore, the transition was not really easy and you had to manage your effort as well as possible in order to be strong in the headwind part but still be able to ride very fast for the return. Because it really was very fast in the last 15 kilometers!”. Stefan Küng was one of the last competitors to start on Friday, and he set the second fastest time when crossing the first intermediate, six seconds behind Geraint Thomas. After him, Filippo Ganna and Rohan Dennis proved to be 41 and 20 seconds better respectively. Then came the tailwind section, where the Swiss rider could show all his power. If he could not make up the whole gap he had on Ganna (30 seconds at the finish), and that Wout van Aert managed to take him a few seconds to snatch the silver medal, Stefan Küng was still able to knock Thomas and Dennis out of the podium to grab bronze. “I would have liked to come home with the world champion’s jersey, but when you are beaten by someone stronger on D-Day, you shouldn’t have any regrets,” he said a few hours after the race. “I’m still happy to bring home a medal from this time trial world championship. I think I had the best possible preparation. There were two big appointments for me this year, with the European and World Championships. I was able to be there and perform as I wanted each time.”

Riding with a Lapierre Aerostorm painted with the European champion’s colours on Friday, Stefan Küng therefore conquered a second world medal among the Elites, in two different disciplines, which is quite a rare thing. “It’s a reward for all the work we’ve done, not just this year, but since the last World Championships,” he commented. “We had a good debriefing after the time trial, and we have invested a lot in this area since then. Among other things, the new Lapierre time trial bike got developed and I was able to bring my ideas in this process. I want to thank the team very much for supporting me throughout this period. This medal proves that we worked well and that it was worth investing all those hours. I would also like to thank Jurgen, my trusted mechanic, as well as Julien Pinot, my trainer. Part of this medal is also theirs. In any case, it gives a lot of confidence. We are on the right track and we will continue to work, relying on these foundations which have proven to be working”.