For his first participation in the Amstel Gold Race, on Saturday, Stefan Küng went up against the race favourites. The Swiss rider was right up there for the big fight in the final. He even was in contention for the victory, then for the podium, before eventually securing eighth place in the Dutch event. A very good sign one week away from Paris-Roubaix. It is also the eighth top-10 in a row on a WorldTour Classic for the Groupama-FDJ cycling team, who aims to keep this series going. On a side note, Valentin Madouas (14th) et Quentin Pacher (18th) also entered the top-20 on Sunday.

Due to the French elections, the 2022 cycling calendar was slightly different than usual. One week after the Tour of Flanders, the riders were expected in the Roubaix velodrome but in the Dutch Limburg. The Amstel Gold Race indeed preceded the “Hell of the North” in the Classics’ order, but Groupama-FDJ only made one change compared to their Ronde’s line-up. Only Lewis Askey was replaced by Quentin Pacher at the start of Maastricht, for the Dutch WorldTour Classic, considered in-between the Flemish and the Ardennes ones. Thirty-three climbs were on the menu, but none included cobblestones, and the peloton was happy to let only six men go away from the start. Owain Doull (EF Education-Easy Post), Johan Jacobs (Movistar), Emils Liepins (Trek-Segafredo), Luca Rastelli (Bardiani-CSF-Faizenè), Ide Schelling (Bora-hansgrohe) and Aaron Van Poucke (Sport Vlaanderen-Baloise) were able to take a five-minute margin, which was then easily controlled by the favourites’ teams. “We had a plan to open up the race at km 158, on a winding road”, said Benoît Vaugrenard. “Unfortunately, there was a headwind, so we ruled out this option. The race got crazy for a bit, but everything then got back together thanks to Ineos Grenadiers, who had a very strong team and who really controlled the race. Like every year on the Amstel, the decision was eventually made in the series of climbs from km 200”. “It was the race we were expecting”, confirmed Stefan Küng. “Given the wind, we knew the race was going to blow apart from the Kruisberg. We always needed to be up front. Olivier and Quentin followed the moves perfectly, which allowed us not to be too far behind. It was very important to be right there and hang on in the top positions.”

“Another fine top-10 in a great Classic”, Benoît Vaugrenard

In the last fifty kilometres, more and more riders got dropped from the back. In a bunch reduced to around forty men, Groupama-FDJ still had four guys. “If there were moves from far, we had Quentin, Kevin or even Olivier, and then Valentin and Stefan were our major cards for the final”. The Frenchman and the Swiss man were up there when everything eventually exploded twenty-seven kilometres from the finish line, in the Keutenberg. After a frantic pace from Ineos Grenadiers and an attack by Tiesj Benoot, eleven men managed to take a gap. That included Stefan Küng. “Valentin said he didn’t have the same legs as last week,” explained Benoît. “On these races, if you miss 2-3%, it makes a real difference. However, we had Stefan in front, and we knew there was something to do”. The first chasing group including Valentin Madouas and Quentin Pacher was soon left behind irremediably, and victory was therefore promised to one of the eleven leading riders. “There were two guys from Ineos, and they played their cards well,” said Stefan. “Kwiato went away without even attacking, and everyone looked at each other behind. Cosnefroy was very strong to come back to him a bit after. No one could follow. Then, I was expecting moves from Van der Poel or Hirschi, but they didn’t occur, and it was as usual very tactical at the end.” “If we had had Valentin with Stefan, it would obviously have been better, but the strong guys were still in front”, claimed Benoît. “When Cosnefroy went away, it came down to the legs, and I don’t think Stefan was able to follow him”.

About fifteen kilometres from the finish, Michal Kwiatkowski and Benoit Cosnefroy found themselves together in the lead and collaborated to stay away from the group including Stefan Küng. The gap reduced to around fifteen seconds at one point, but it never got closed. Eventually, the victory went to the Polish rider after a two-man sprint. A few seconds behind, Tiesj Benoot secured third place after anticipating the sprint and Stefan Küng then crossed the line in eighth. “We have no regrets”, said Benoît. “It’s still a fine top-10 in a great Classic. Valentin (14th) and Quentin (18th) are also up there, and we have three of them in the top-20. That shows the team’s quality and it’s just like their last races. We are not surprised either by Stefan. He just keeps doing what he has been doing for a few weeks. We can see that he has really improved on the short and explosive efforts. On these races with hills shorter than a kilometre, we know that he can follow the best. He did it again today.” Groupama-FDJ have now completed eight WorldTour Classics in the top-10, in a row. “I’m happy with my feelings,” said Stefan. “It was perhaps the race that suited me the least in this Classics campaign. So, being up to it and being able to fight at the front is very good. It allowed me to keep the race rhythm before the big goal of this first part of the season: Paris-Roubaix, next Sunday”. 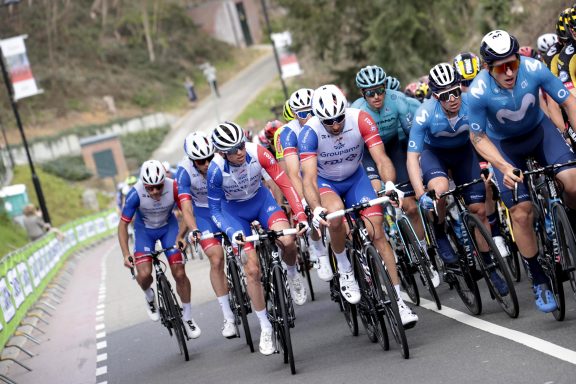